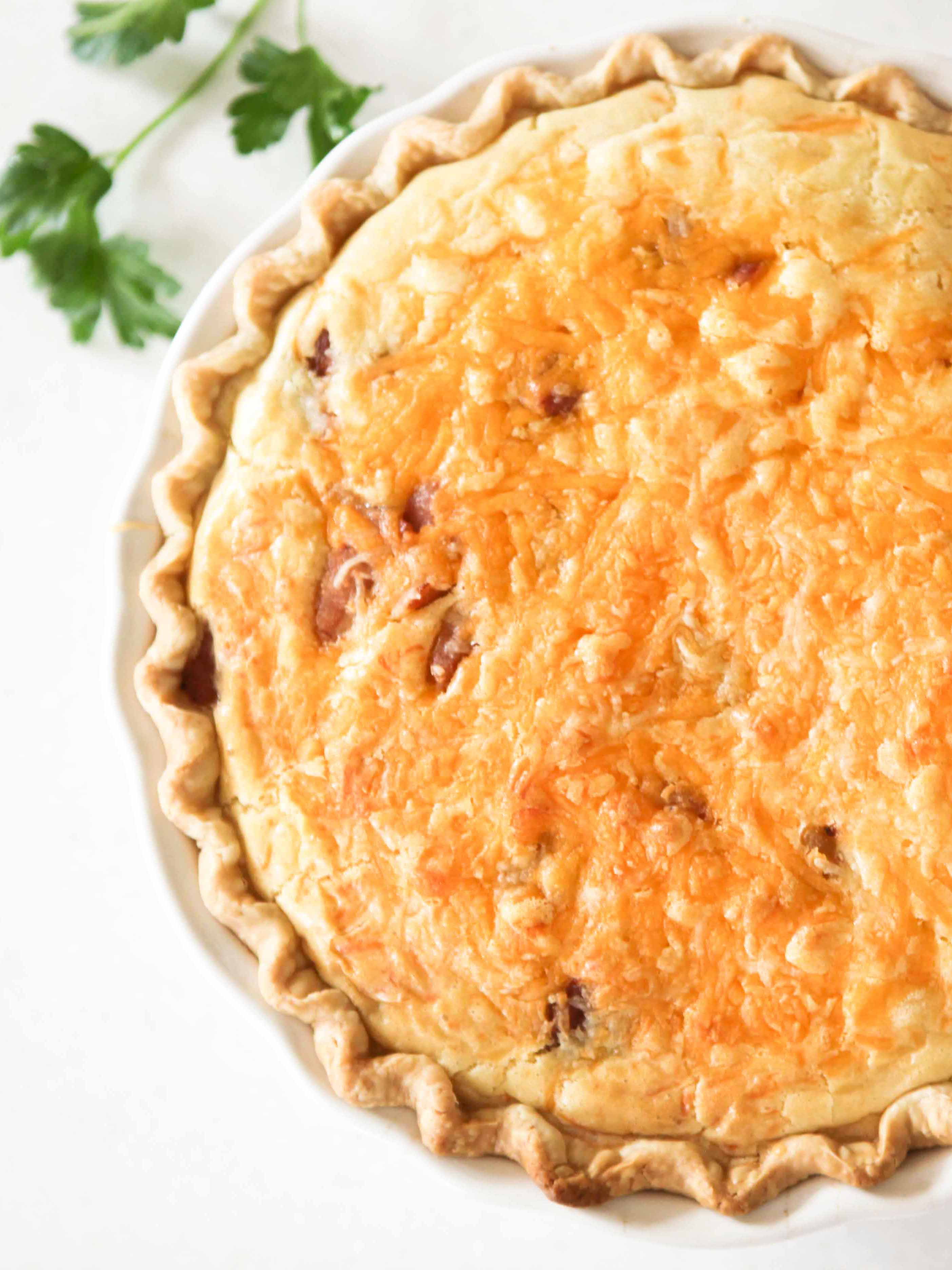 This quick quiche recipe is basically a cheater’s version of quiche, but it tastes wonderful.  The base of an authentic quiche is heavy cream, cheese and eggs.  It does NOT include Bisquick in the ingredient list (which this recipe DOES). Since this isn’t the real deal, I use milk instead of cream.  Feel free to make that substitution, but I don’t find it necessary.  There’s already approximately a ton of butter in this pie, so I figure that covers the milk-fat quota.

Anyway, besides tasting great, the reason I love this recipe is that it’s quicker, and it sets up. Authentic French quiche is a custard, and sometimes it doesn’t set. (Don’t misunderstand, I’m not against French Quiche!  When you make it correctly, it’s delicious, delightful, delectable, and divine, but that’s another post.)  For now, enjoy this lovely impostor.

Preheat the oven to 350 degrees F. and prepare a pie crust.  You can use a pre-made crust from the grocery store, or try this easy homemade pie crust recipe. 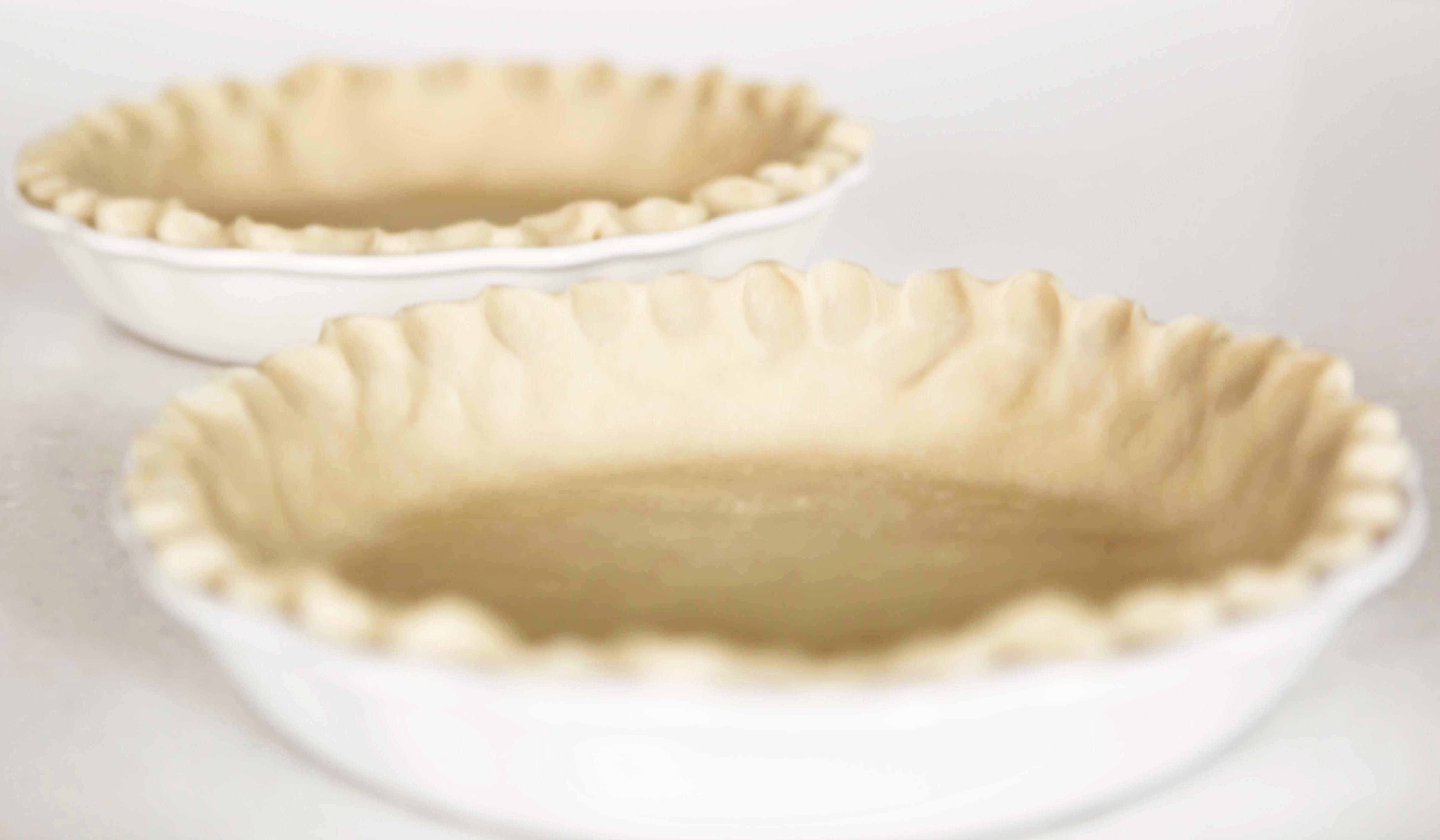 This recipe makes ONE quiche, but I made two different kinds, so I doubled it.

Add
1 cup ham cubed (or bacon)
Fry over medium heat for another 5 minutes. 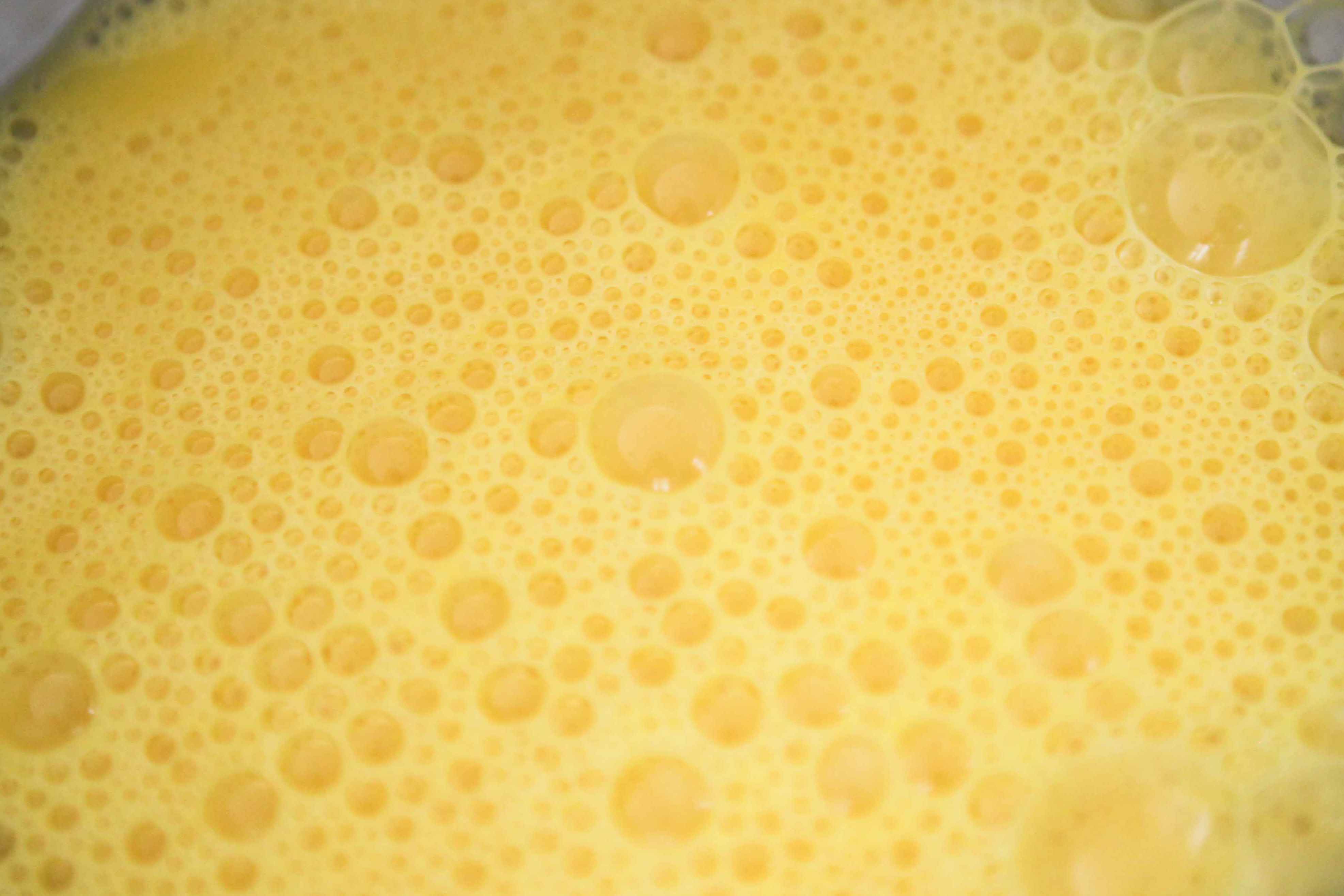 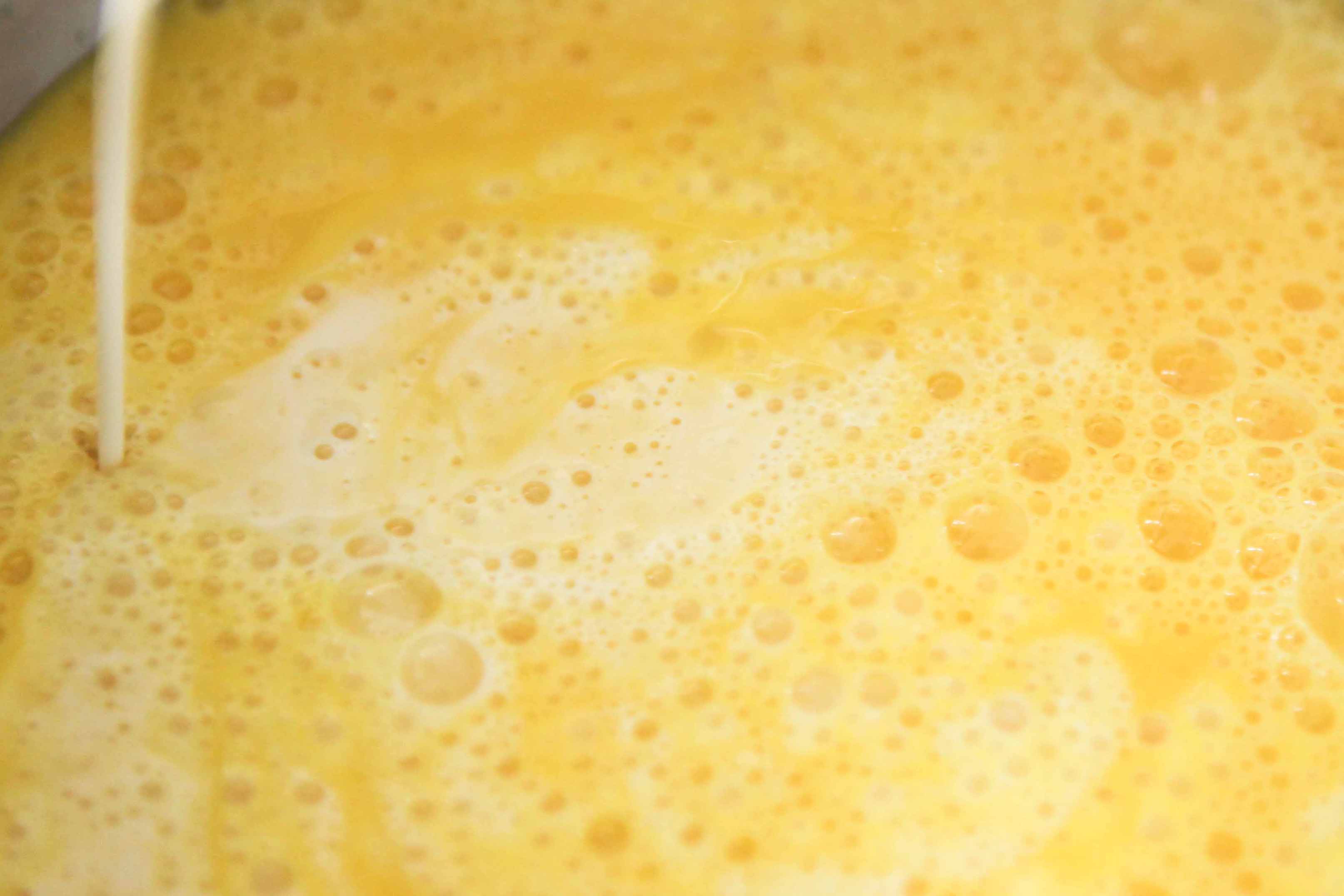 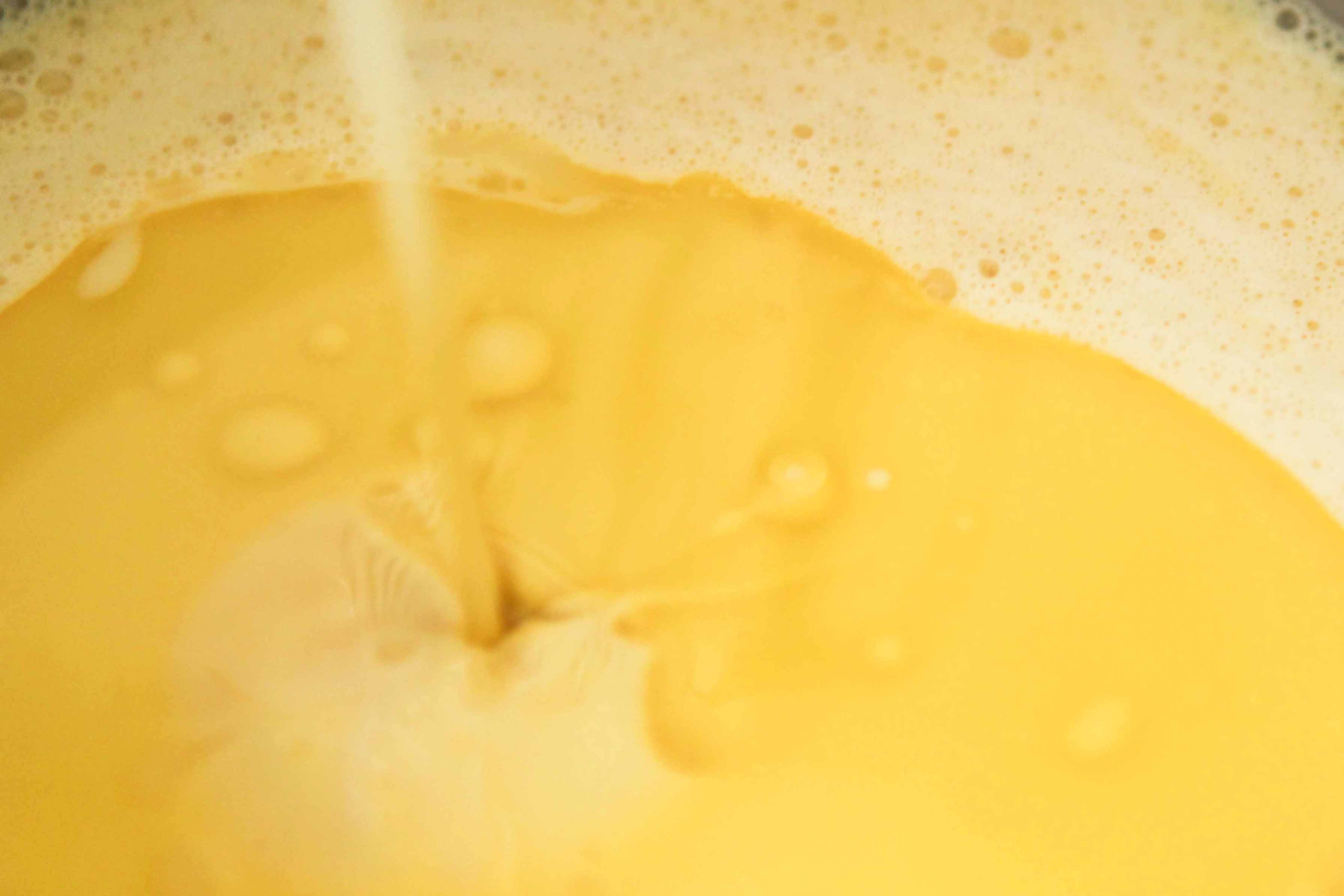 Begin filling the pie shell.
On the left is a ham and cheddar quiche. I spread ham and onion on the bottom.
On the right is a ham, spinach and Swiss quiche. I put slices of Swiss cheese on the bottom, and covered them with spinach then ham and onion.
Use your imagination. You could use cooked broccoli or asparagus, and you could use cooked bacon instead of ham. I’ve tried all of the above, and all were delicious. You can also use any cheese you want.

I added slices of cheese, which is completely optional.

I put another layer of the fillings on top of the cheese. If you prefer not to mess with layers, just put all your fillings in at once.

Now pour the egg mixture over everything inside the crust. 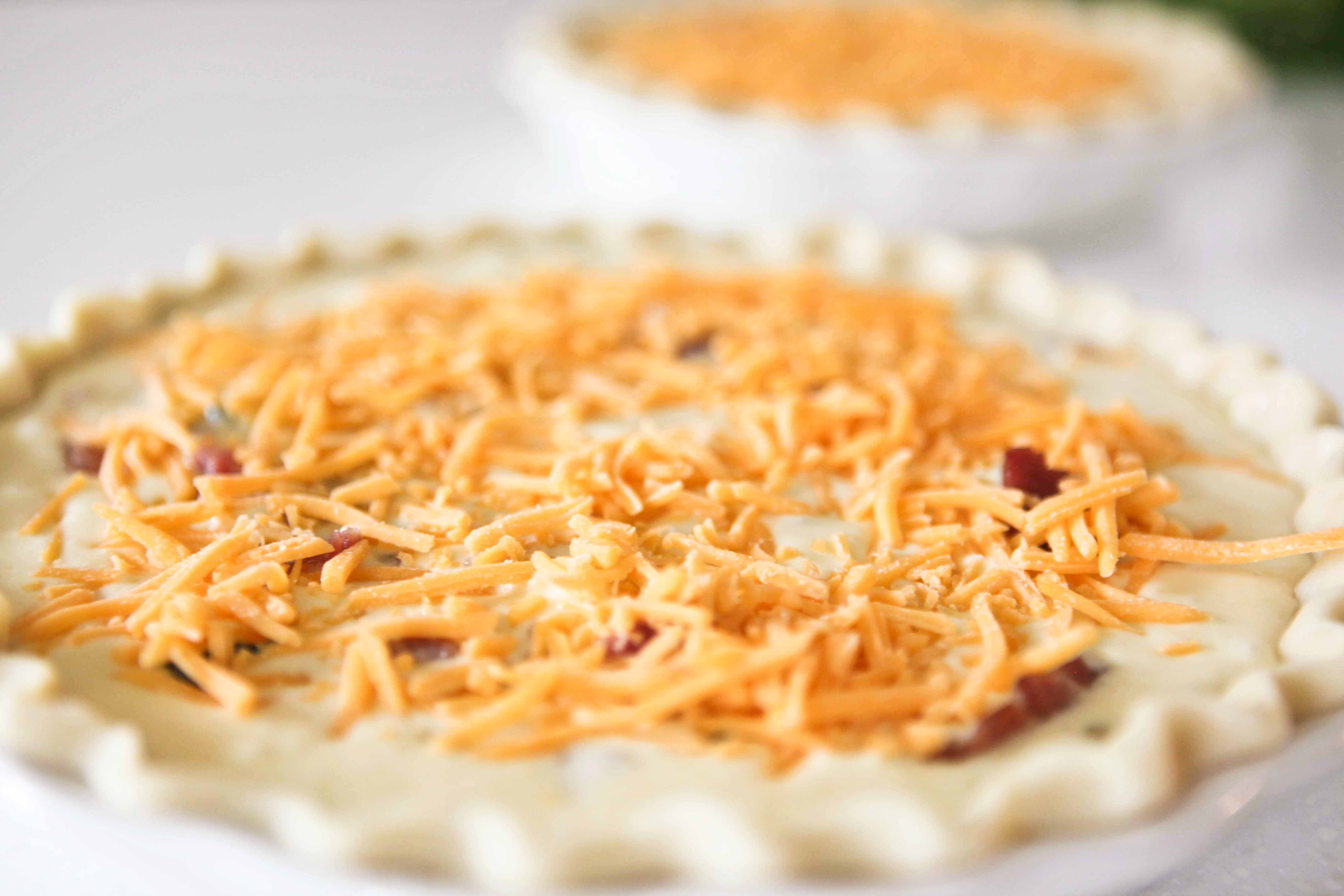 Sprinkle with
1 cup cheese, grated
This makes a sort of top crust, and it’s crucial to the yummi-ness. Don’t leave it off!

Now make a foil tent to protect the edges of your crust from burning. 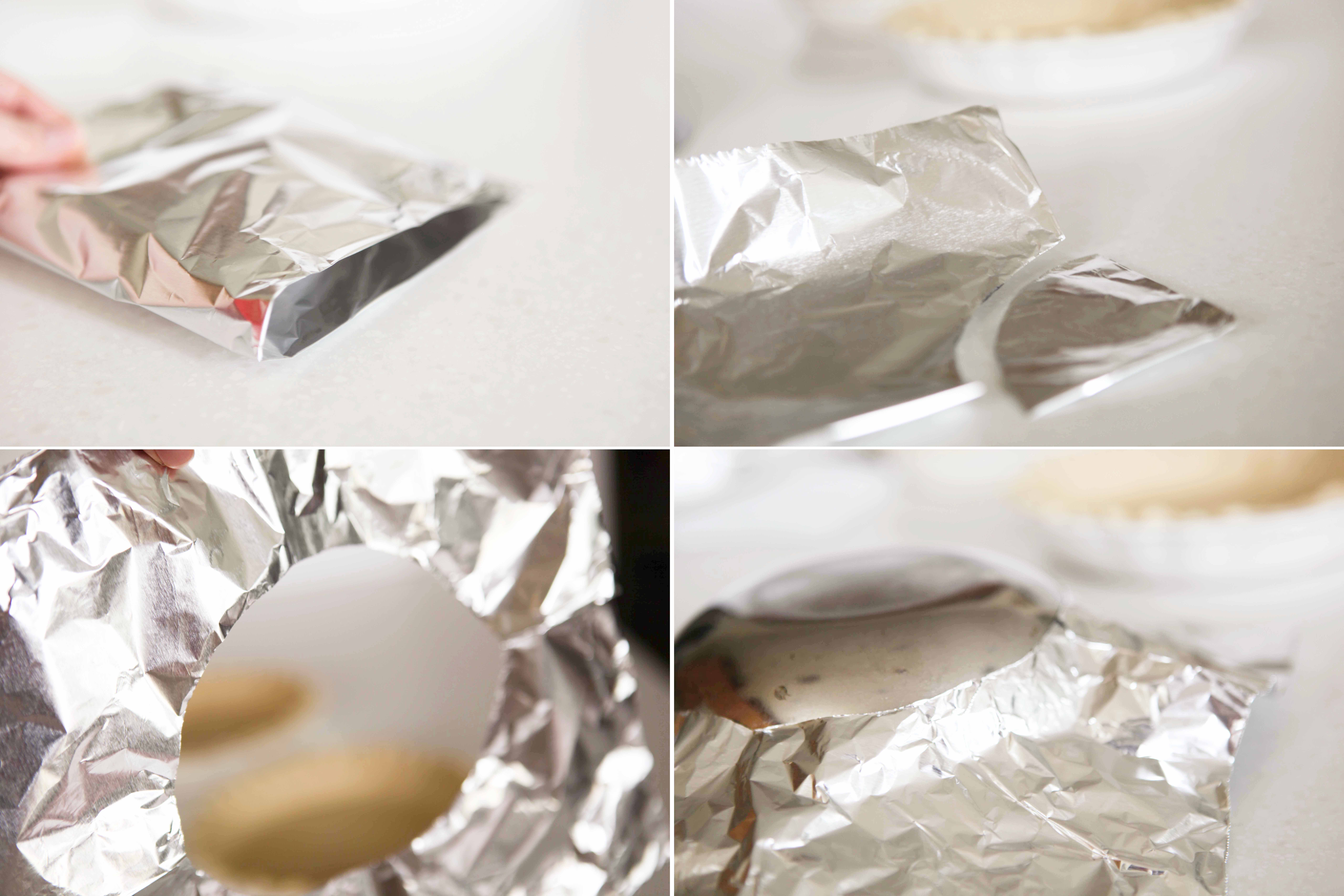 Cut a 12 inch square of foil, and fold it in half, twice. Cut a triangle out of the center. Open it up, and mold the hole around the bottom of a bowl. The molding will prevent the foil from falling into the center of the quiche and sticking to the cheese. 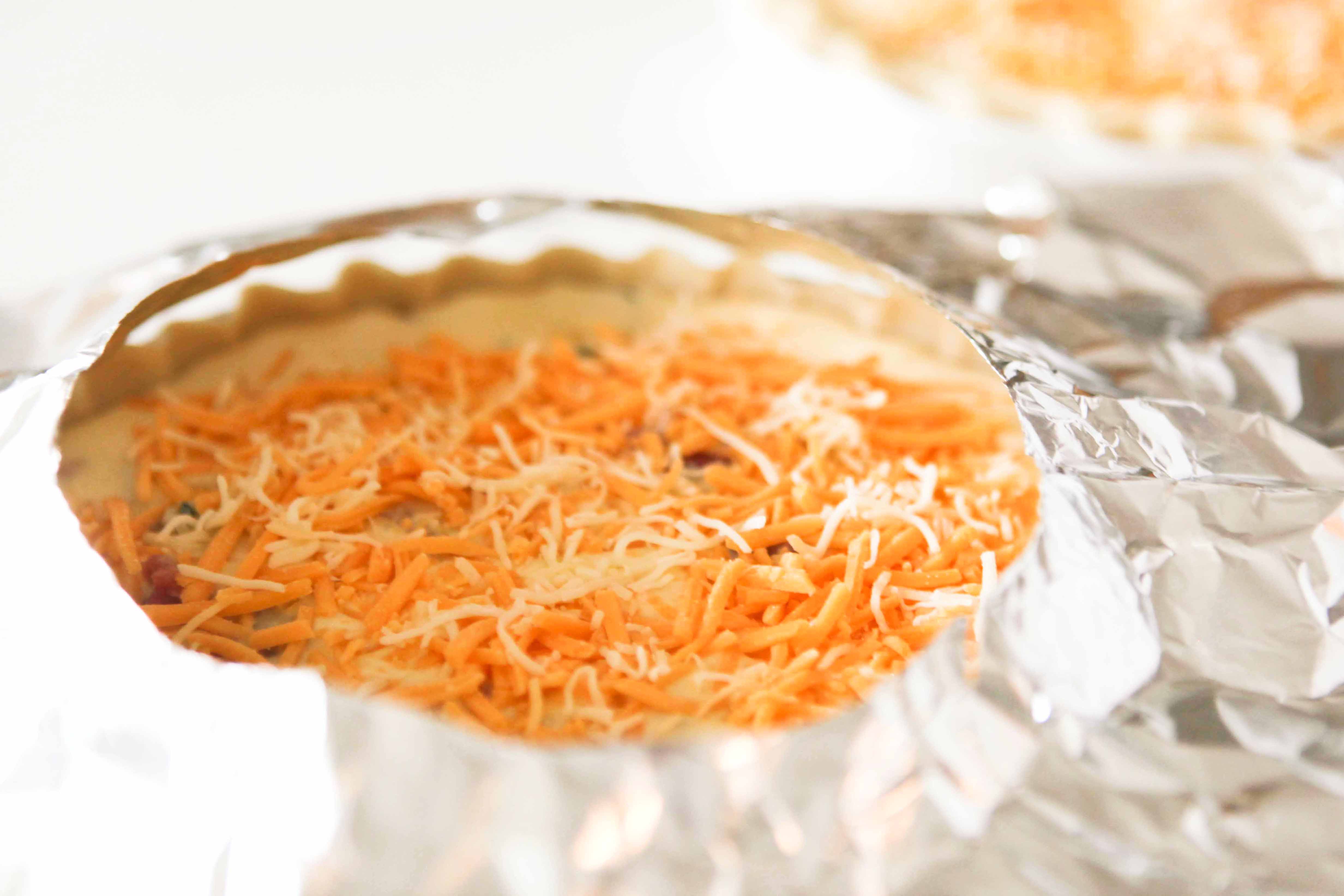 Place a foil tent over the quiche and bake at 350 degrees for 45 minutes. The center should no longer jiggle when moved. 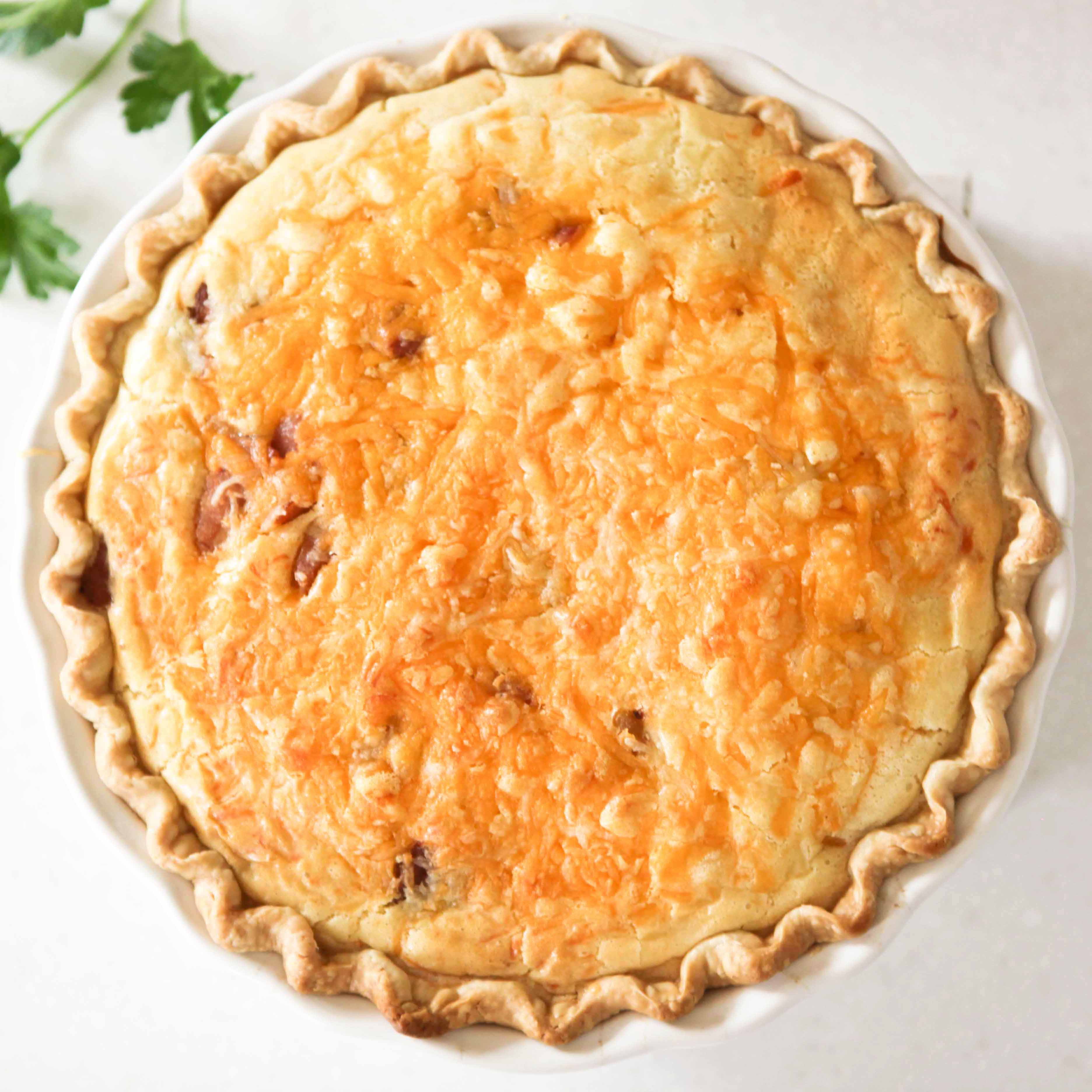 Remove from oven, and … 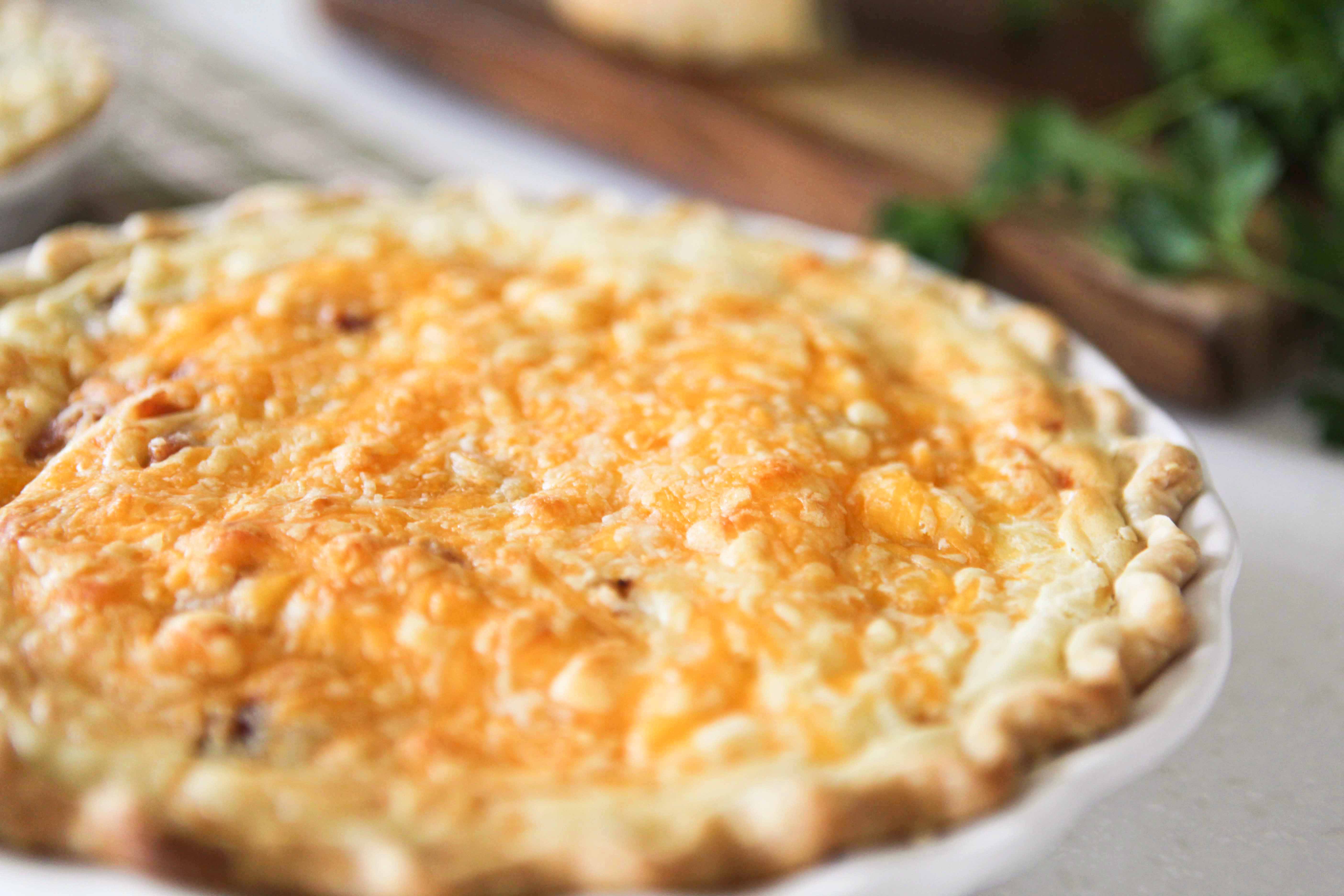 … allow it to rest for at least 15 minutes before cutting.

Ham and Cheddar on the left and Ham, Spinach and Swiss on the right. 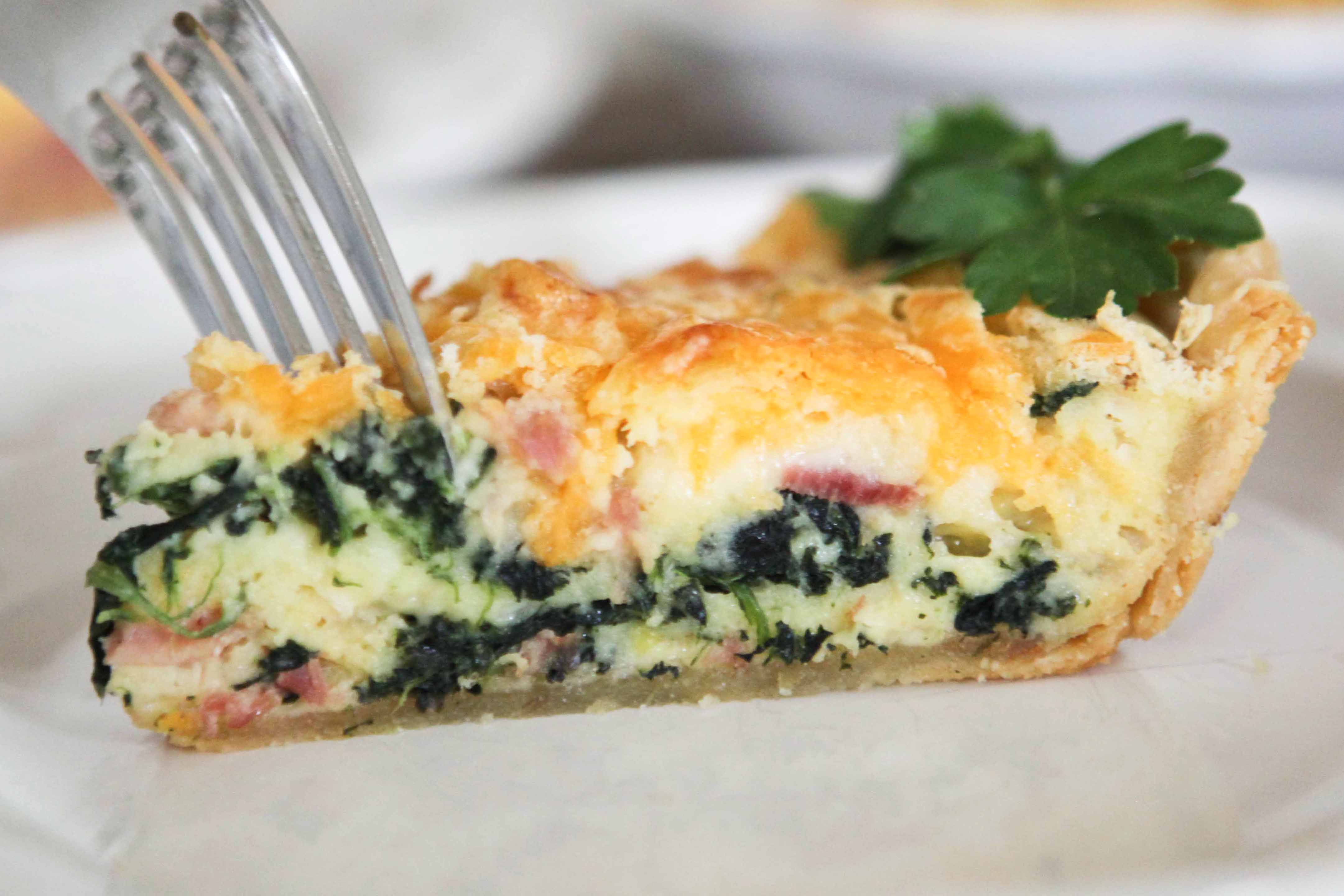