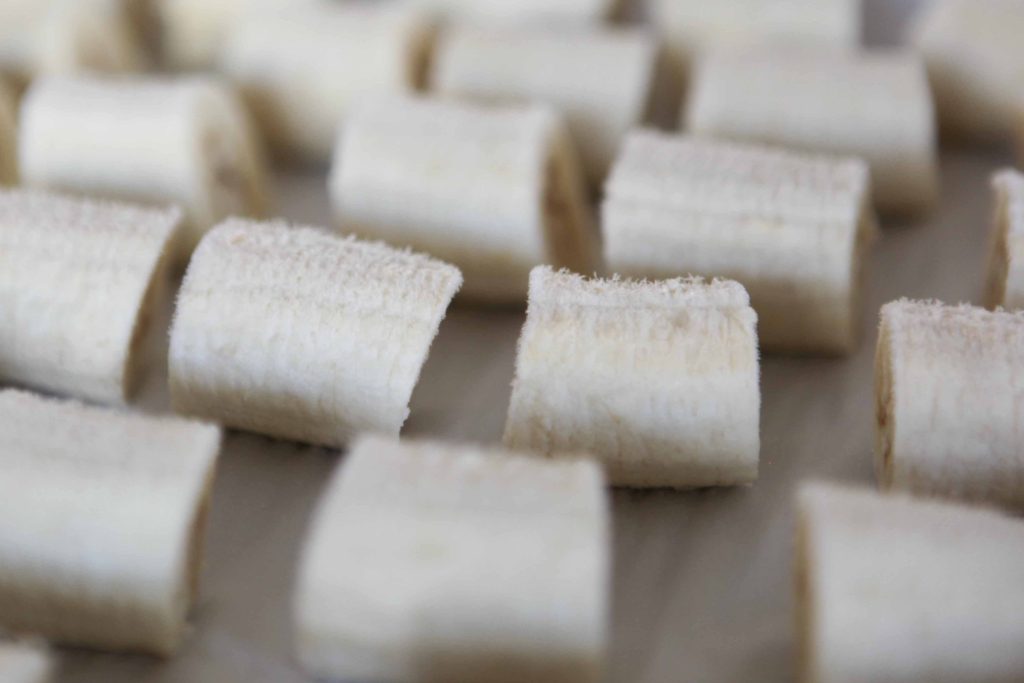 I need to have them on hand because we like to make smoothies or add bananas to protein shakes, but that’s inconsistent, too.  However, one thing remains constant. Within hours of throwing out a bunch of rotten bananas, someone will decide that they want/need one.

This may seem like a silly post, but it’s one that would have benefited me greatly in the past.  Once, a long time ago, I expressed my frustration about our frequent waste of bananas, and a friend suggested that I just freeze them.

I immediately shoved a whole bunch into my freezer.  Within hours they had turned completely black.  I wasn’t worried.  My friend said she did it all the time.  A month later, I pulled them out to make banana bread, but I learned an aggravating fact.  You can’t peel frozen bananas, and if you wait for them to thaw, you can’t separate the peel from the mush. So, I went back to my old routine of randomly, but consistently, throwing away the uneaten ones.

Then, last year, another friend (BETTER FRIEND), told me that you should freeze bananas WITHOUT the peel.

I tried it, and my life was forever improved.  …  No more feeling guilty for wasting precious food.  Plus, I always have some on hand, and these frozen pieces are wonderful for smoothies and shakes; possibly even better than the fresh fruit. You can use less ice, which makes the drinks less watery. 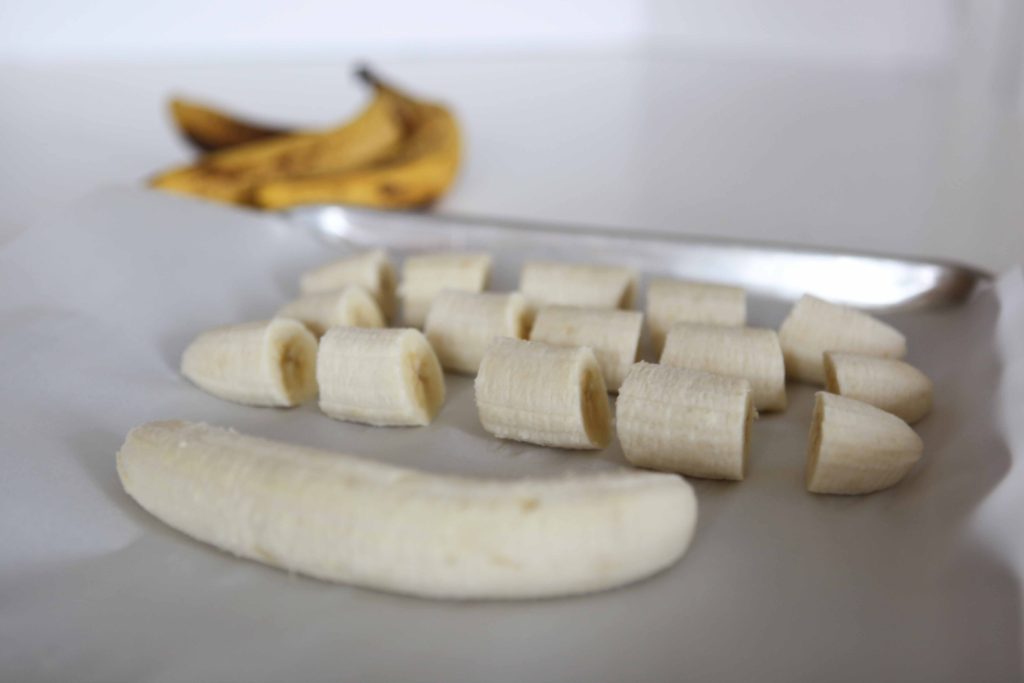 Peel the bananas, and cut them into chunks. (I always cut each one into 5 pieces. This way we know that 5 frozen chunks equals 1 whole banana.) Put them on a baking sheet that will fit into your freezer. 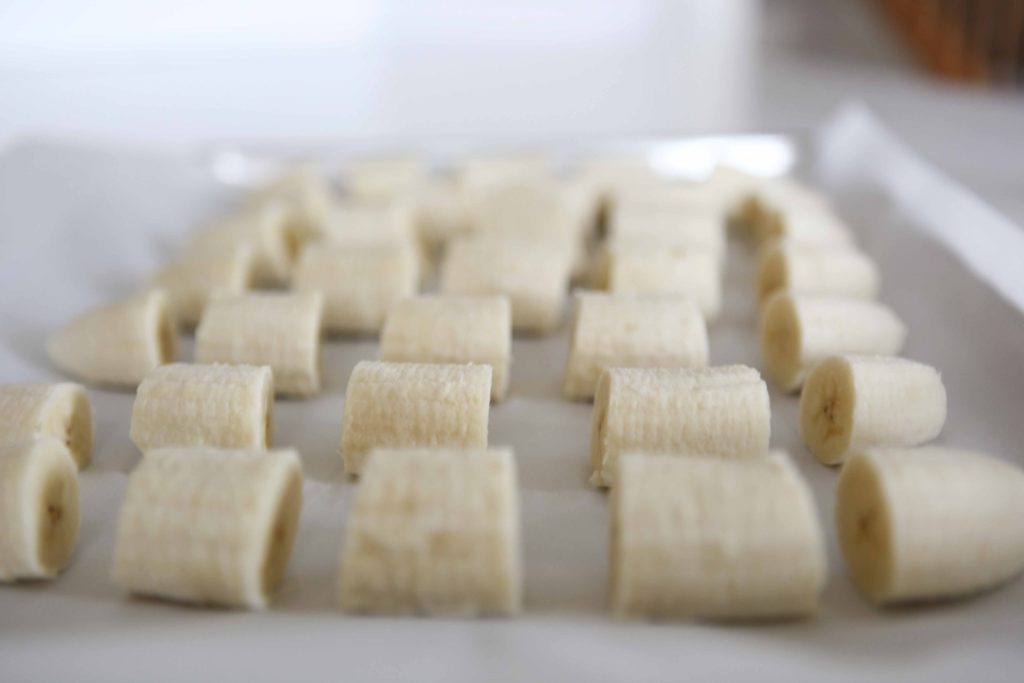 Keep them in a single layer, and make sure that the pieces aren’t touching each other. That’s all there is to it. ( I don’t use any lemon juice of fruit preservatives. I don’t even cover them.) Put them in the freezer for 8-12 hours. If you leave them in there longer, they’ll start to dry out and get freezer burned. 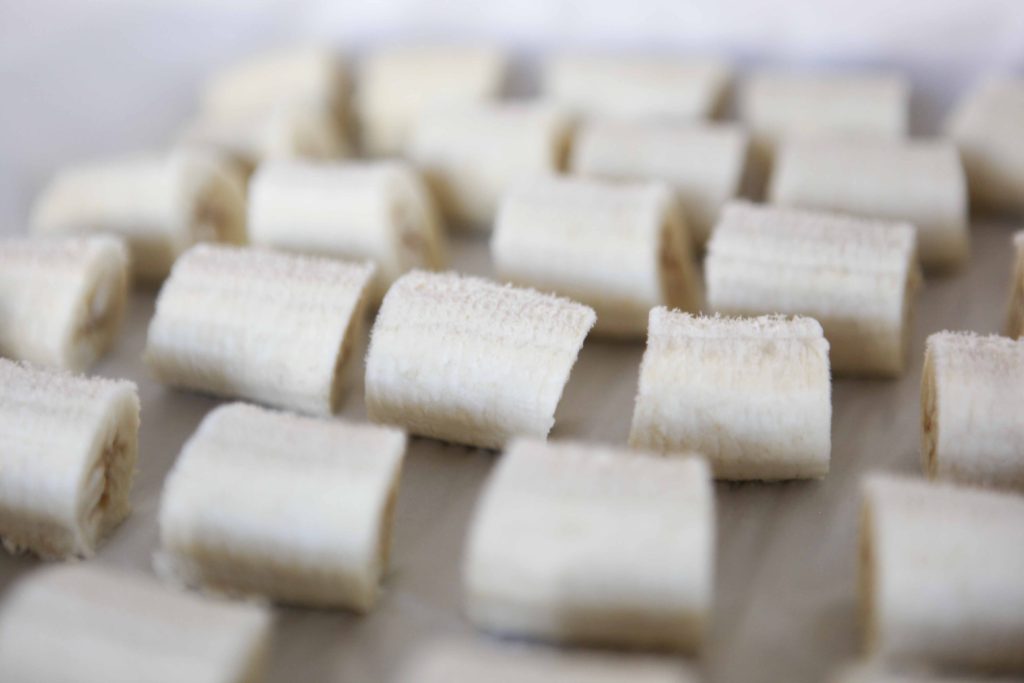 Once they’re frozen, remove them from the freezer, and … 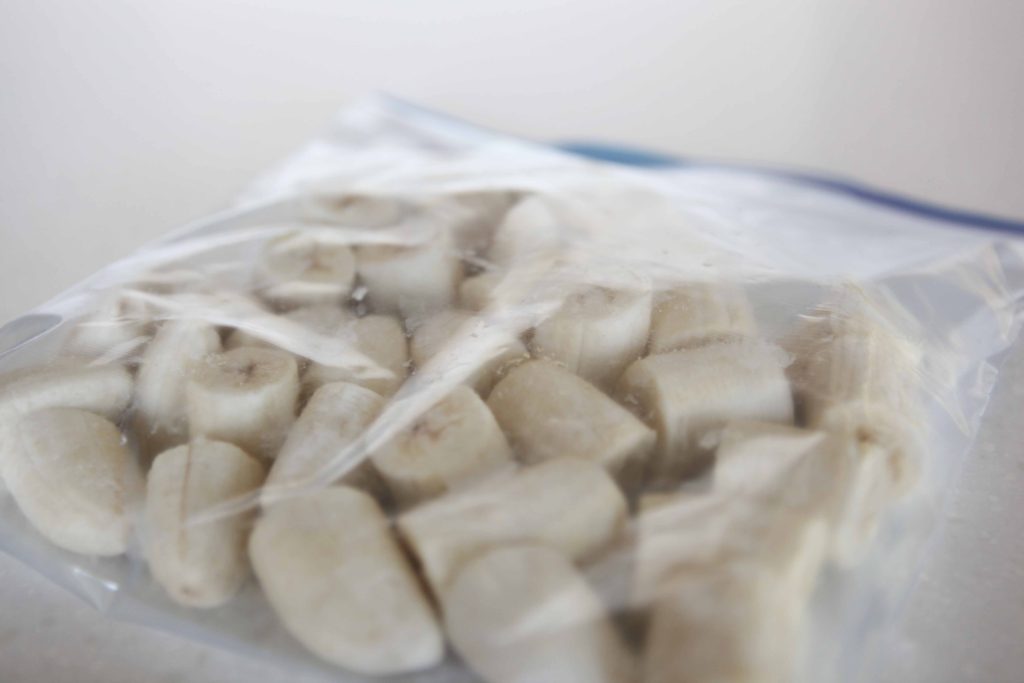 … immediately, put them into a freezer bag. Squeeze out any extra air, and seal it up. Return them to the freezer. 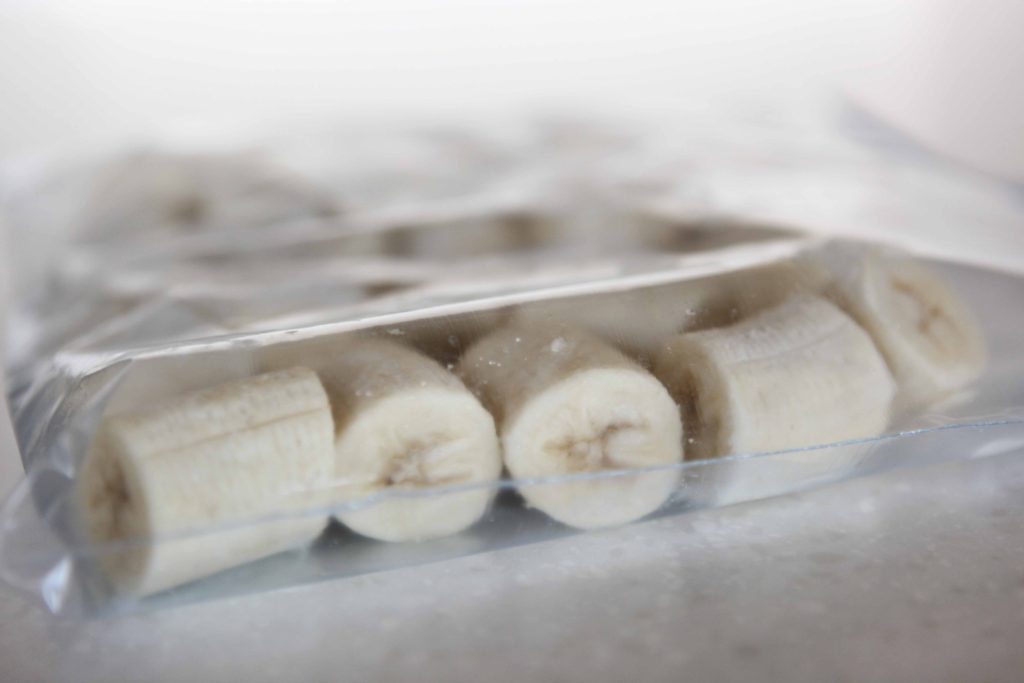 Mine last like this for 3-4 months. They’ll slowly start to darken, but they still work wonderfully for shakes or baking. 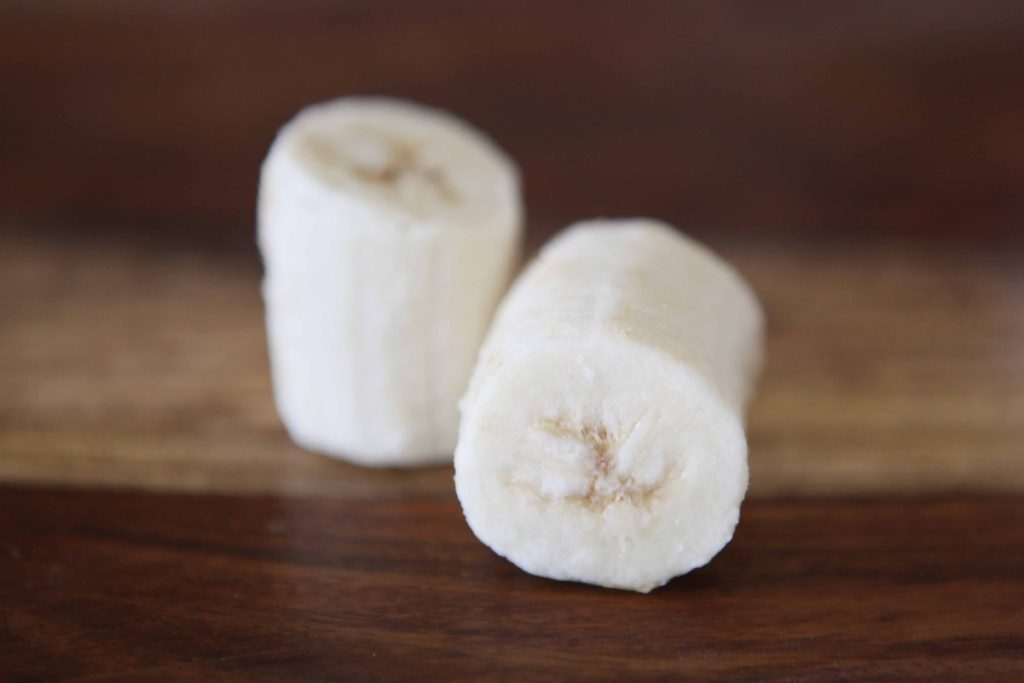 Just look at how lovely they are!
For drinks, throw the frozen pieces directly into the blender, but for baking … 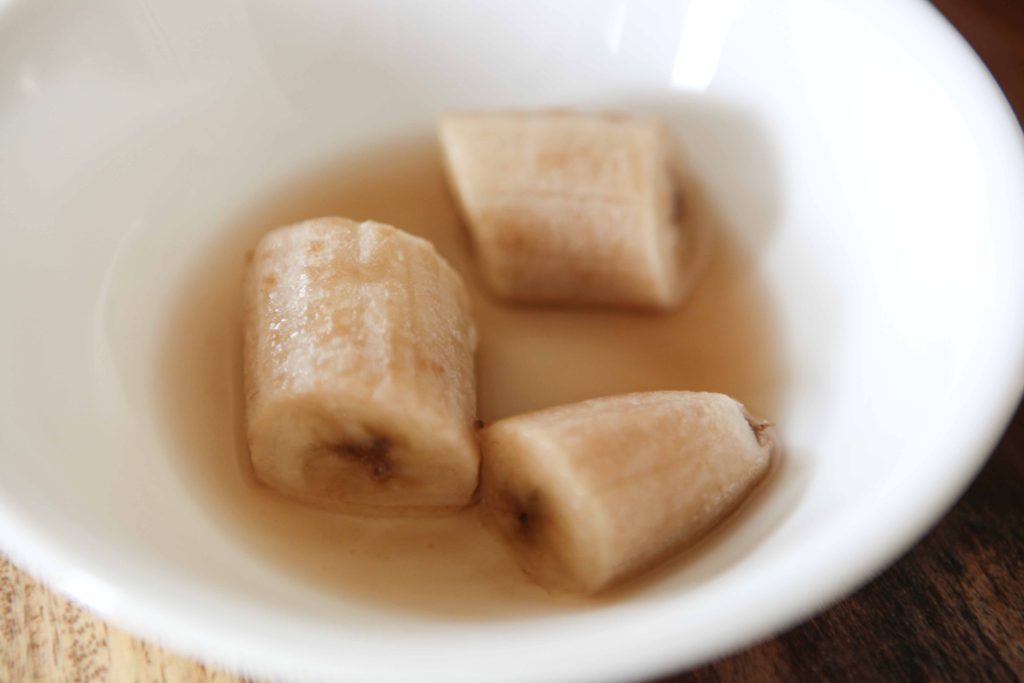 …thaw them first. Put them in a dish, and cover them for about a hour. As they thaw, they’ll darken, so don’t leave them out longer than necessary. Be sure to drain the juices after they’ve thawed, because that extra liquid will throw off proportions. Mash, and use according to recipe directions. It works beautifully, and you can’t tell any difference between frozen or fresh in banana bread, muffins, or cookies.