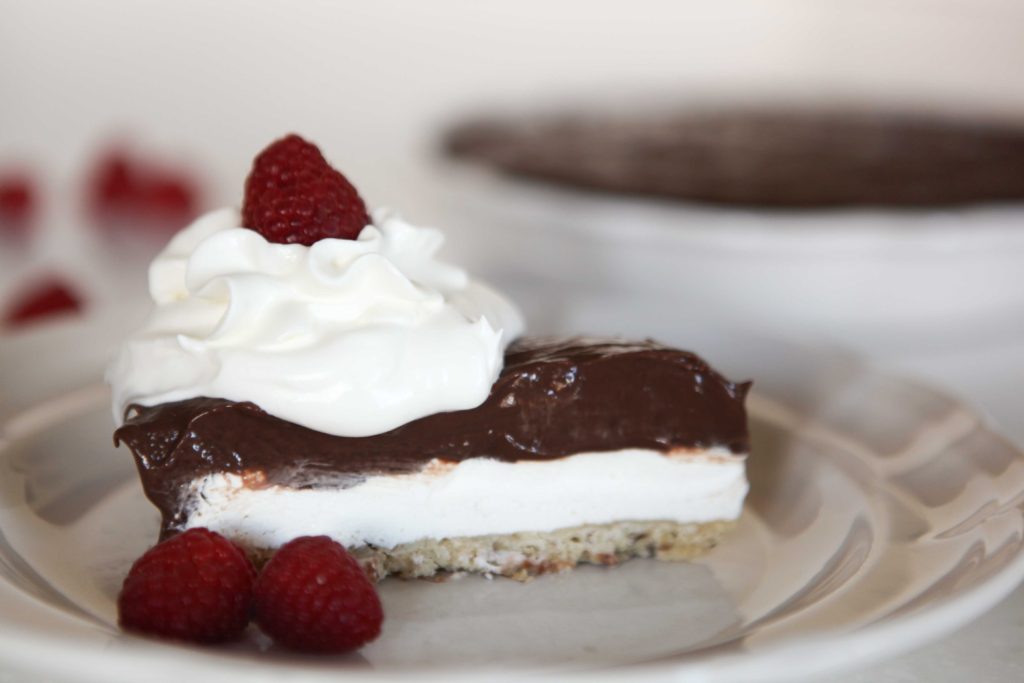 This dessert is the perfect combination of chocolate and cream cheese, sweet and salty, brown and white, etc.  If you’re looking for something delicious and impressive, this is the way to go.  I like to make homemade chocolate pudding because it tastes so good, but you can also use instant pudding.  It’s not quite as fabulous, but it’s faster.  I do it both ways.  Check it out! 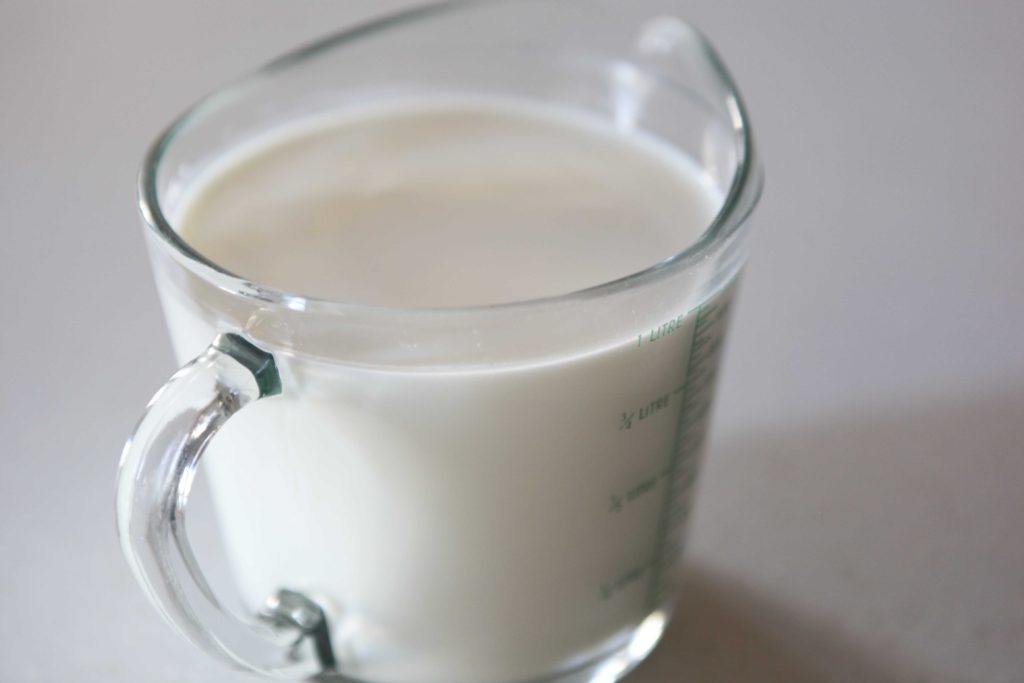 Heat the milk until hot to the touch (3-4 minutes in the microwave).

Combine the sugar, cocoa, cornstarch, and salt in a 6 quart pot.

Separate the eggs.  You won’t need the whites for this recipe, so throw them out, or use them for something else.  If you’re not sure how to separate eggs, here’s a quick tutorial. 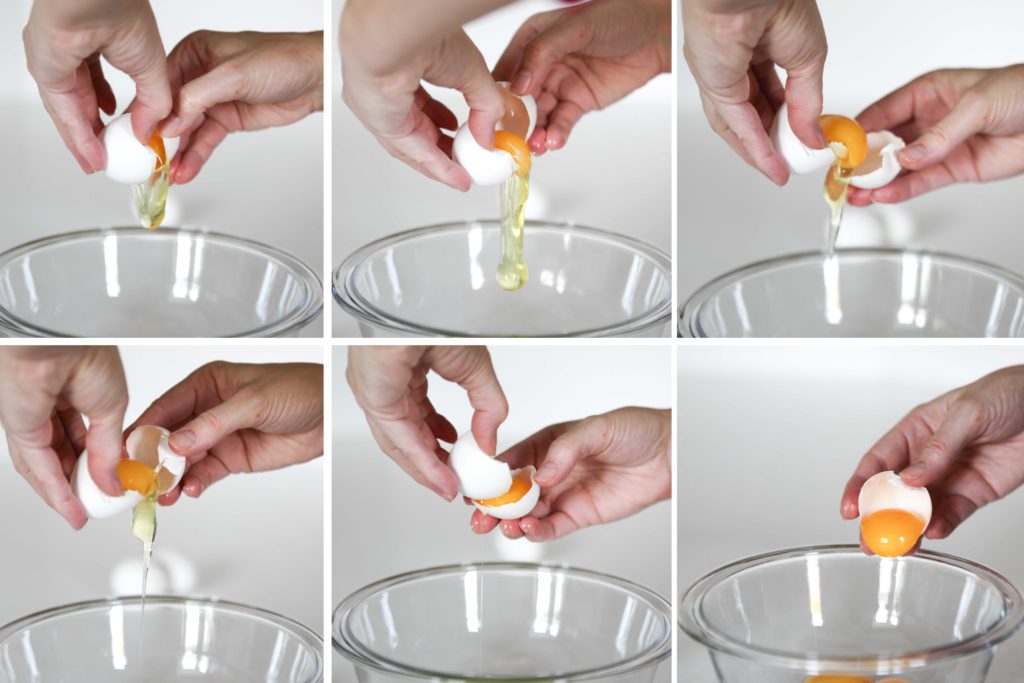 Gently crack your egg, and slowly open it over a bowl. Be careful to let the white fall into the bowl while using the shell to keep the yolk from going with it, and watch that no pieces of shell fall in. Dump the yolk back and forth between the halves of shell, allowing more of the white to go into the bowl. Then put the yolk in a separate bowl. 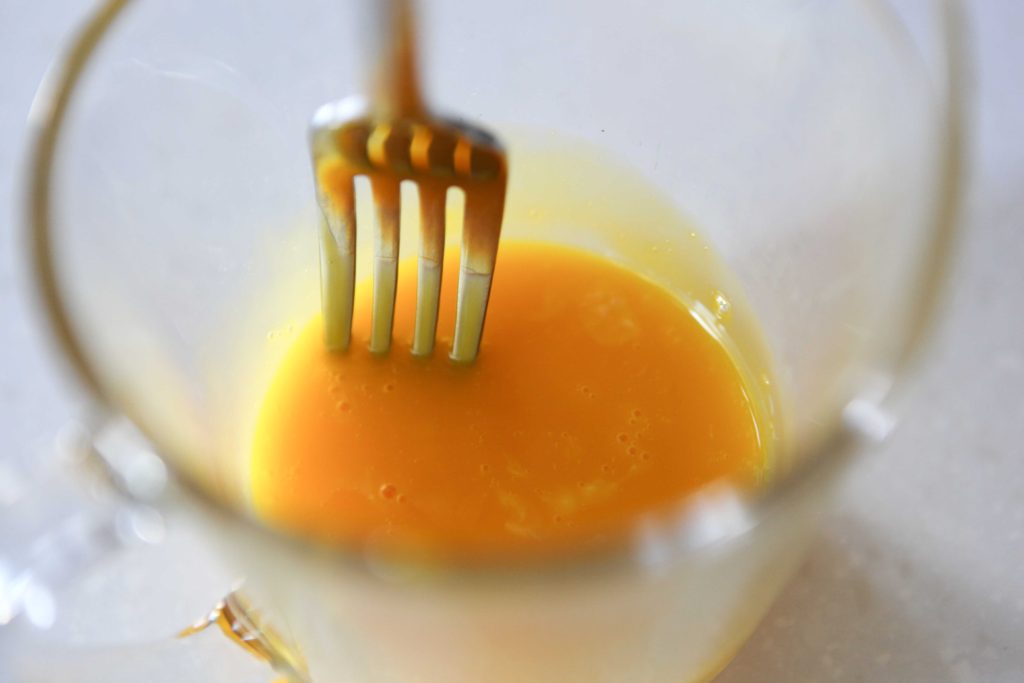 Put the yolks in a 2 cup measure or bowl, and whisk them with a fork. 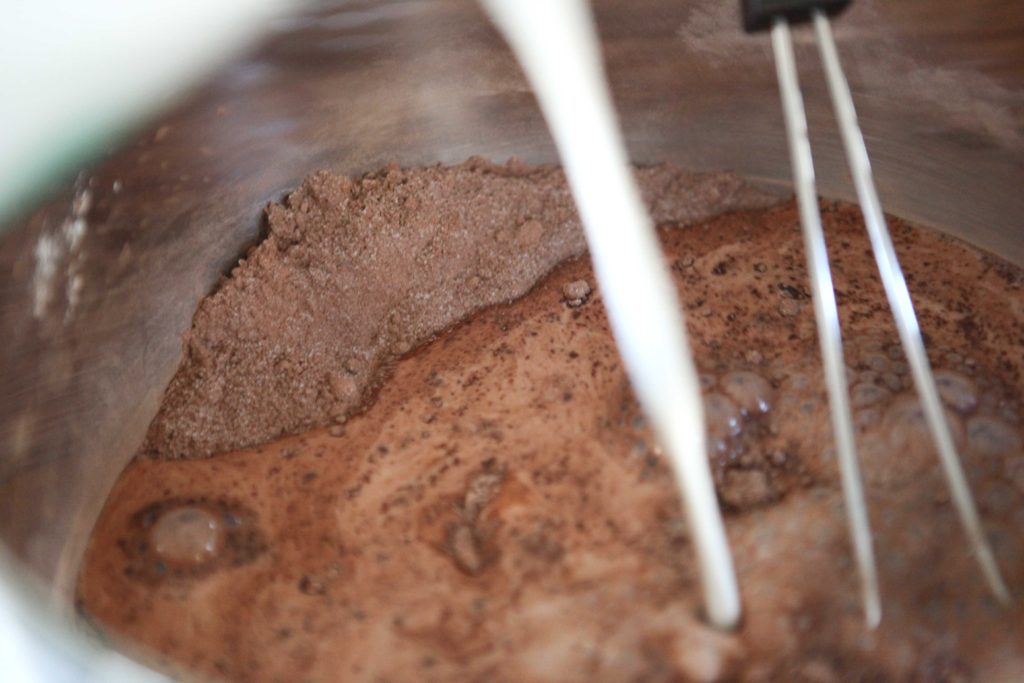 Pour 3/4 of the hot milk (about 3 cups) into the pot with the sugar and cocoa, then whisk until combined. Set aside for a minute. 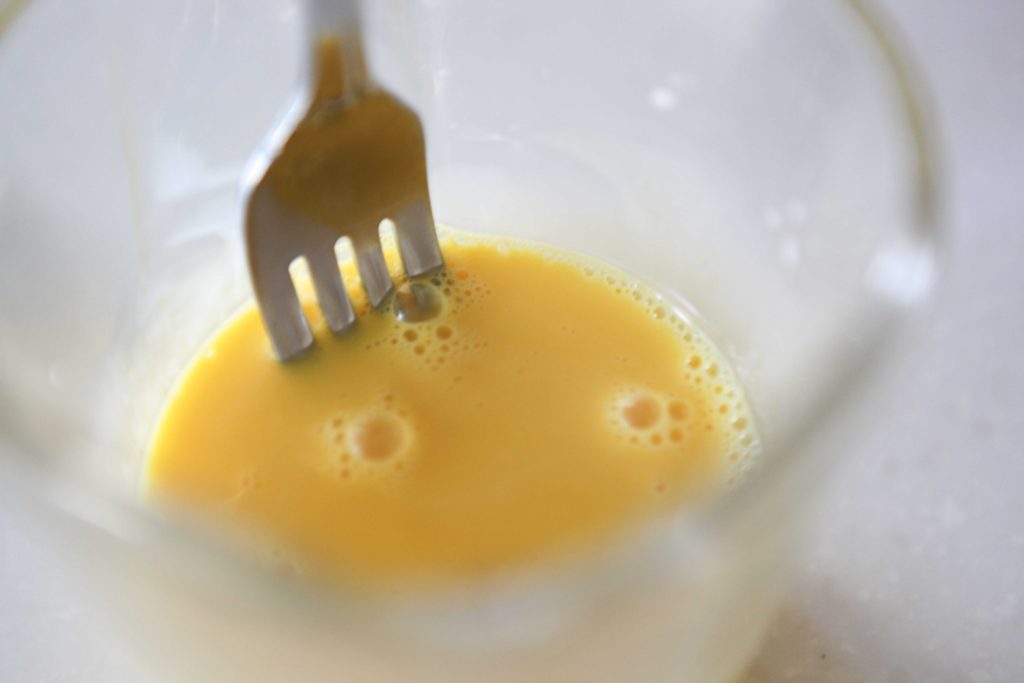 Rapidly whisking the eggs with a fork, slowly drizzle approximately half of the remaining cup of hot milk into them. You need to be very careful, so you don’t end up with scrambled eggs in milk. (Since this was a two-handed process, I couldn’t get a photo.) Heat the last half cup of milk in the microwave on high heat, for another 30-45 seconds, and repeat the drizzle/stir procedure with the egg yolks. 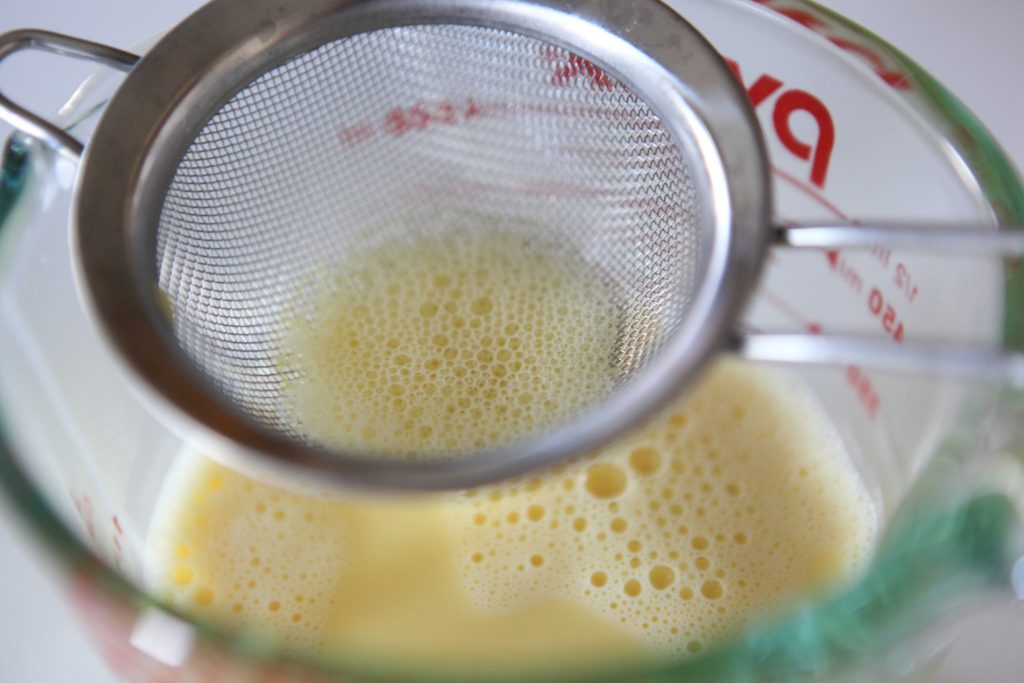 Now, just to be extra sure that you don’t have any scrambled egg lumps in the pudding, pour the milk/egg mixture through a strainer into another cup.  Now set it aside for a few minutes. 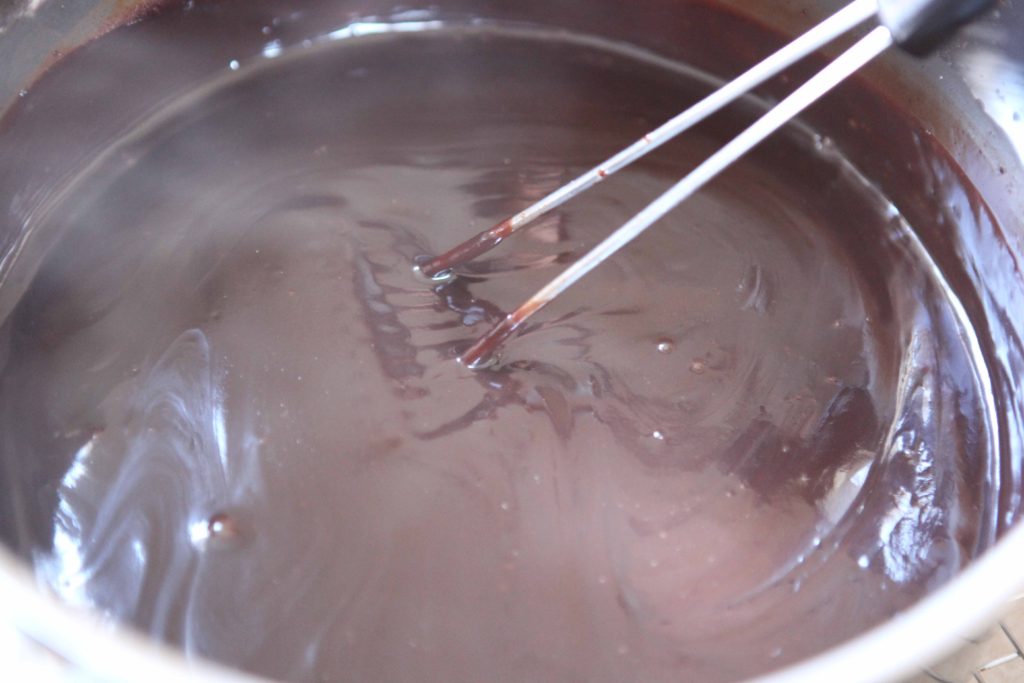 Whisking constantly, bring the chocolate mixture to a boil over medium-high heat. Then remove it from the heat. 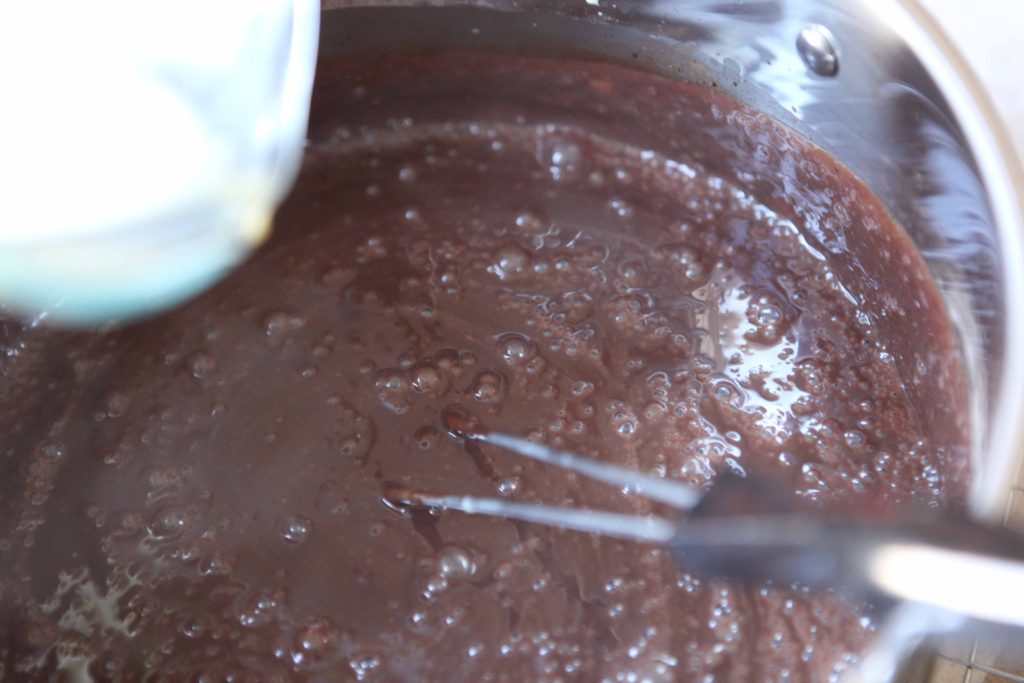 Whisking rapidly, drizzle the egg/milk mixture into the pudding. Continuing to whisk constantly, return the pudding to the heat and bring back to a boil. 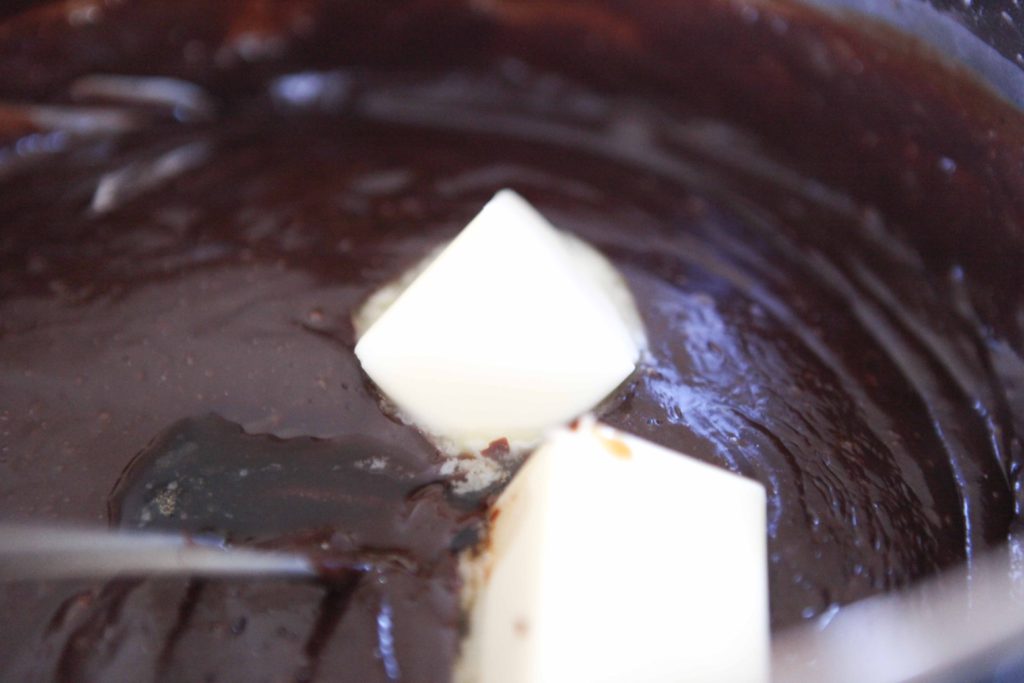 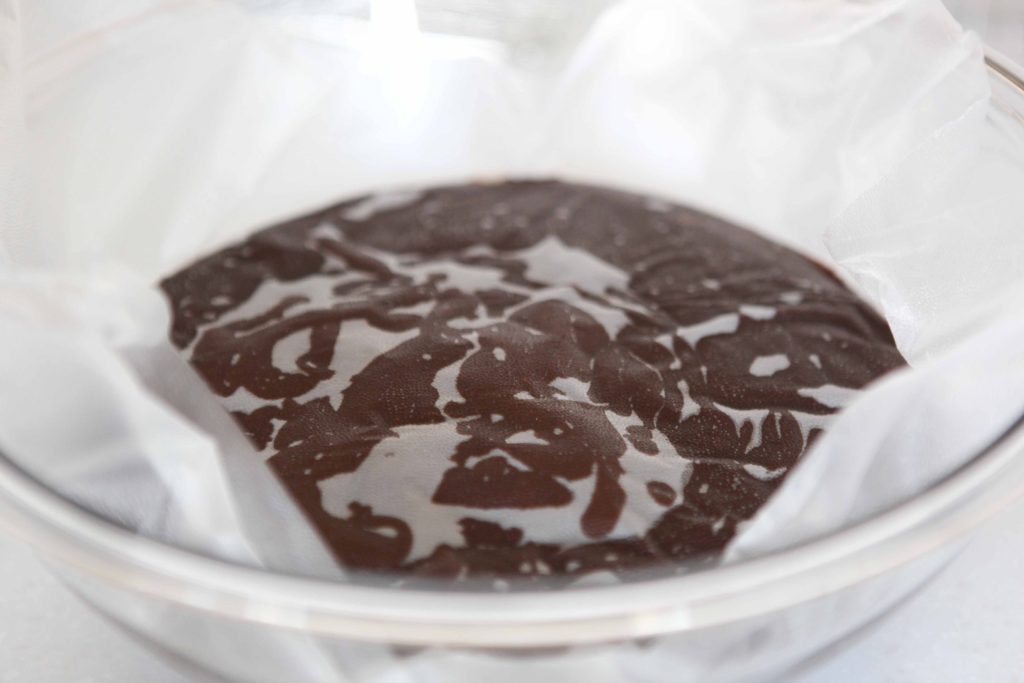 Transfer the hot pudding to a clean bowl, and immediately cover with plastic, allowing the plastic to touch the pudding. This prevents the pudding from forming a skin.  Refrigerate 2 hours, or until completely cool and set.

Combine the flour, butter, salt, and chopped nuts in a bowl, and cut together with a fork until the mixture resembles coarse meal.

Press the mixture into the bottom of an ungreased 13 x 9 inch baking pan. I was being fancy, so I put half the crust in a pie plate, and the other half was divided evenly between 4 small baking dishes.  They were each 4 inches in diameter. 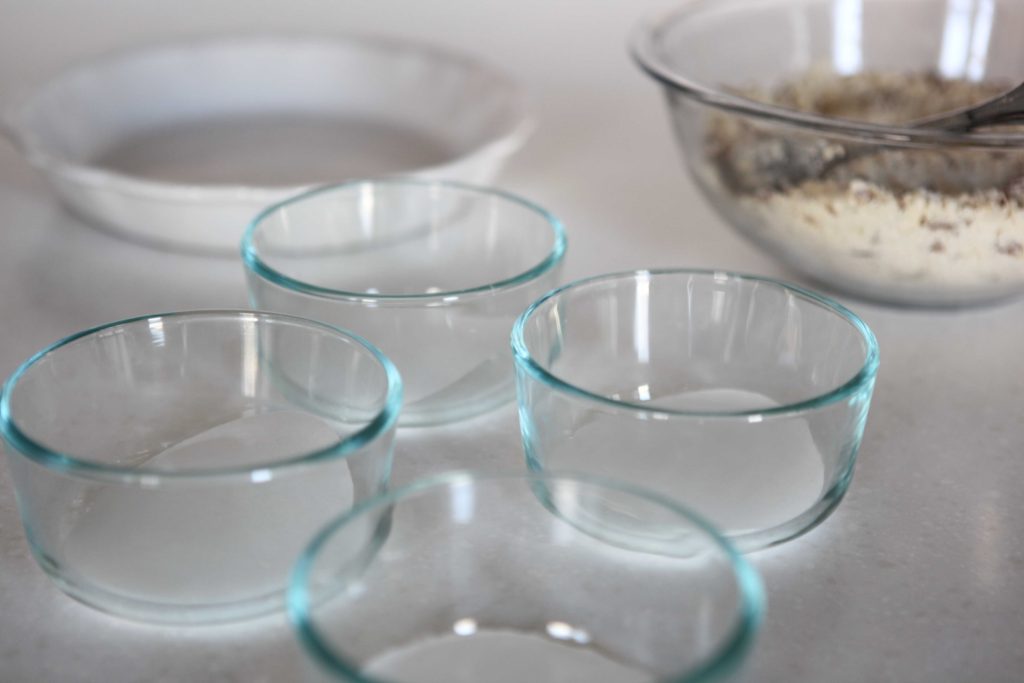 I pressed the crust on top of the parchment.

Bake the crust(s) at 325 degrees for 30 minutes. Cool completely.

When the pudding and crust are ready, make the cream cheese filling.

Combine the powdered sugar and cream cheese, and beat until smooth.

Add the thawed whipped topping and continue to beat until combined and creamy.

Spread the cream cheese filling on top of the crust. 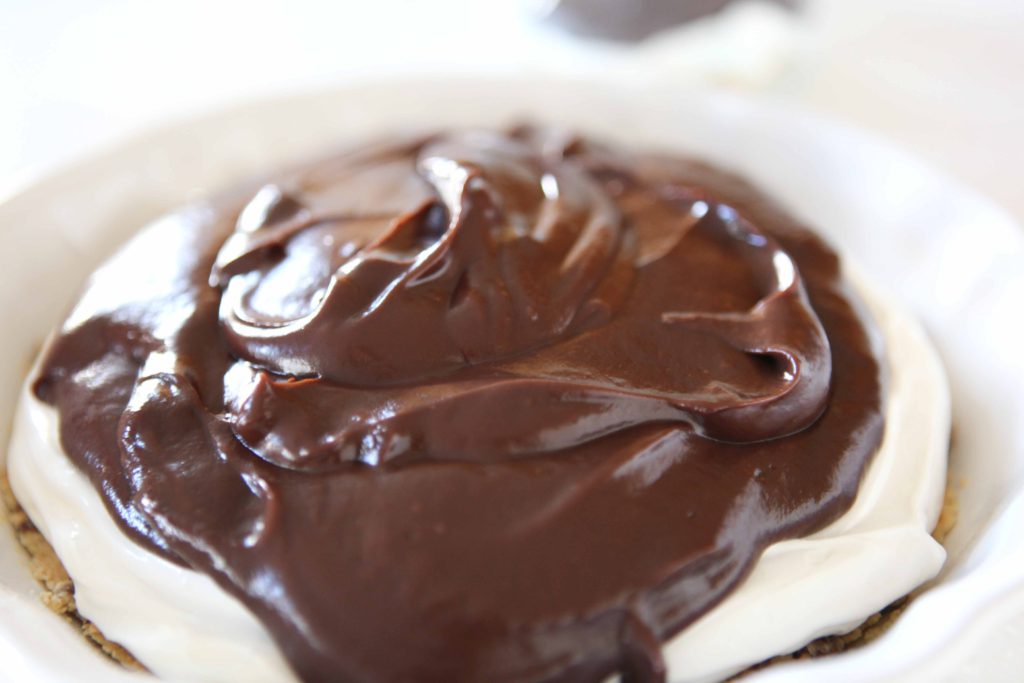 Gently spoon the pudding onto the cream cheese filling. 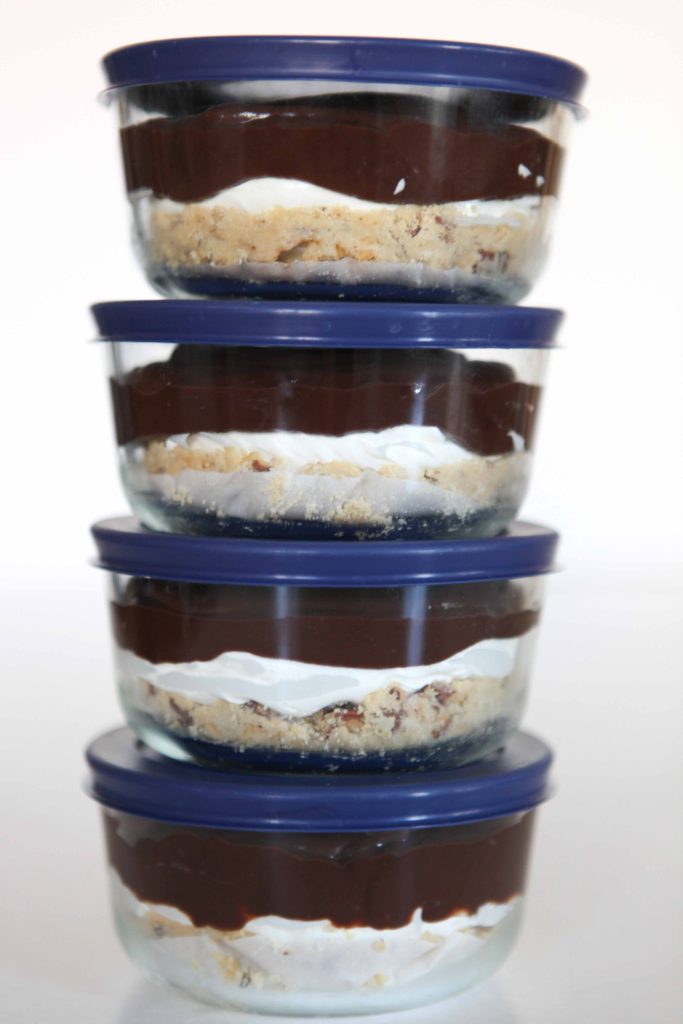 Refrigerate for several hours or overnight. 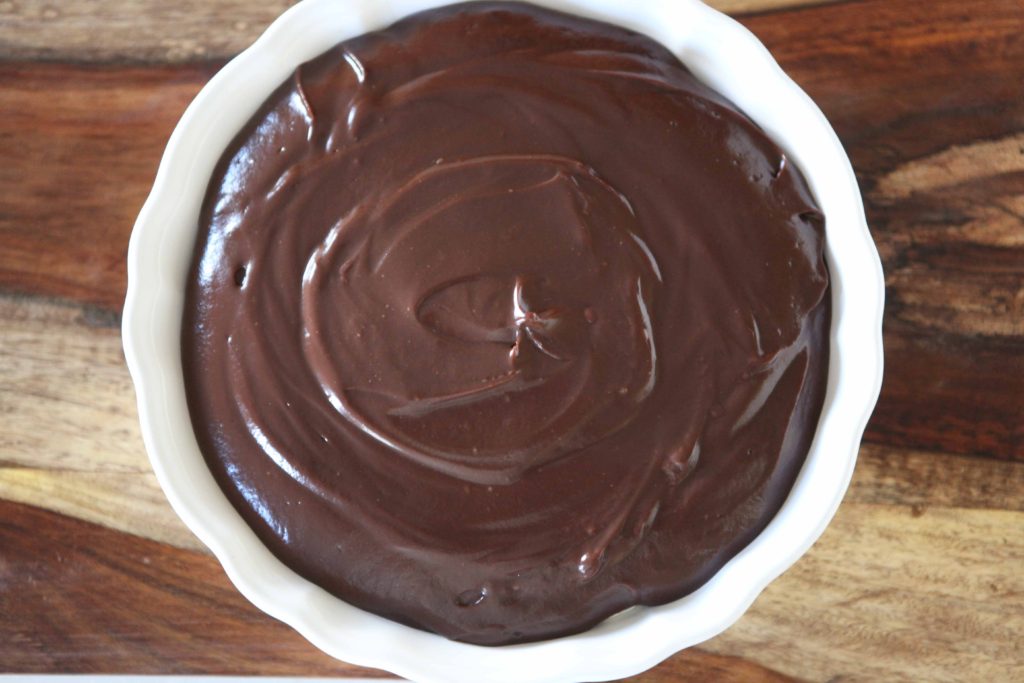 When ready to serve, just cut and top with whipped cream. 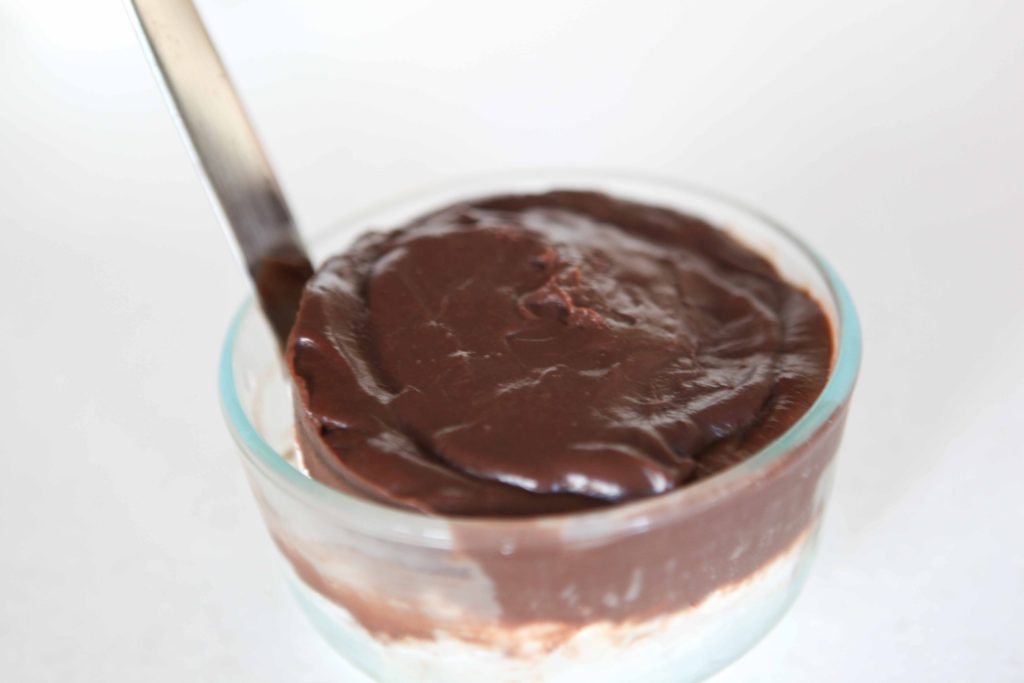 To remove them from the baking dishes, I put them in the freezer for 30 minutes. I ran a knife all the way around the edge, then used it to gently pry up the dessert. 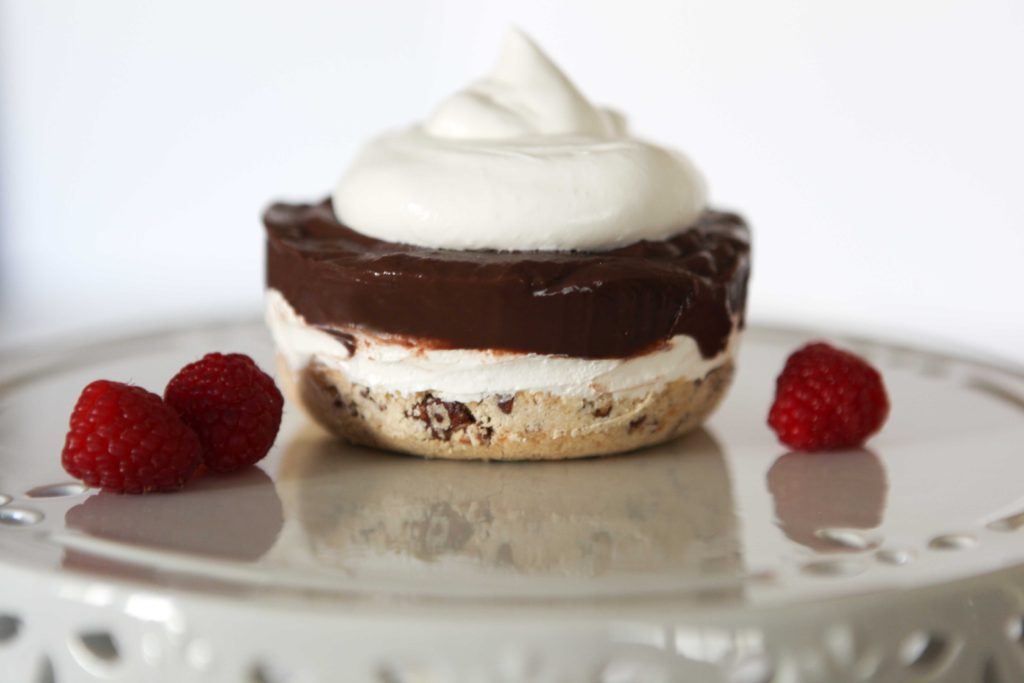 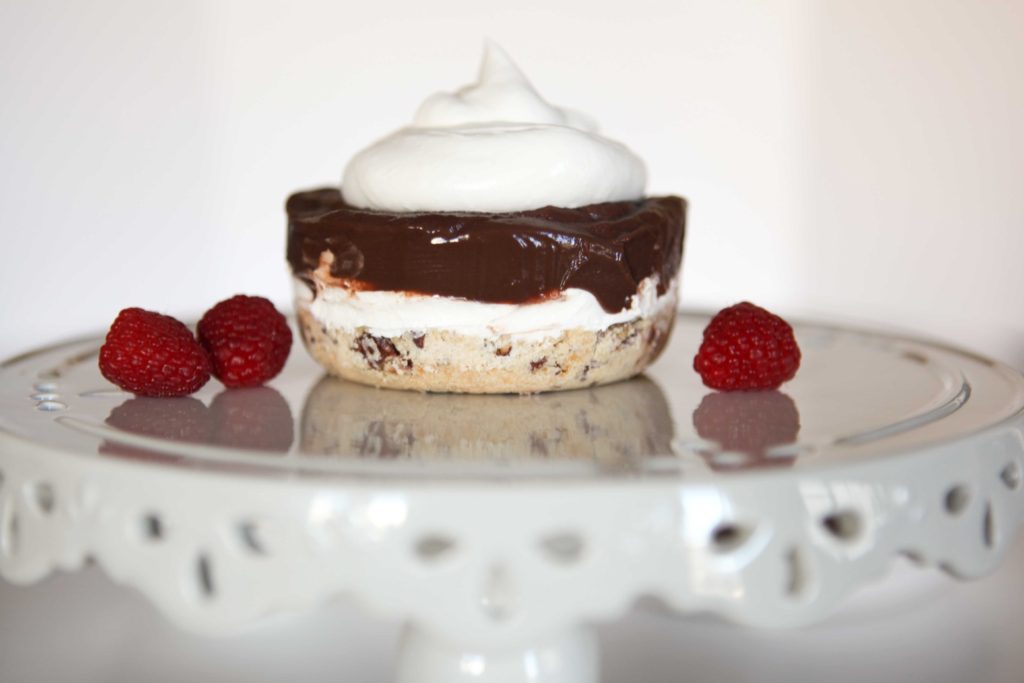 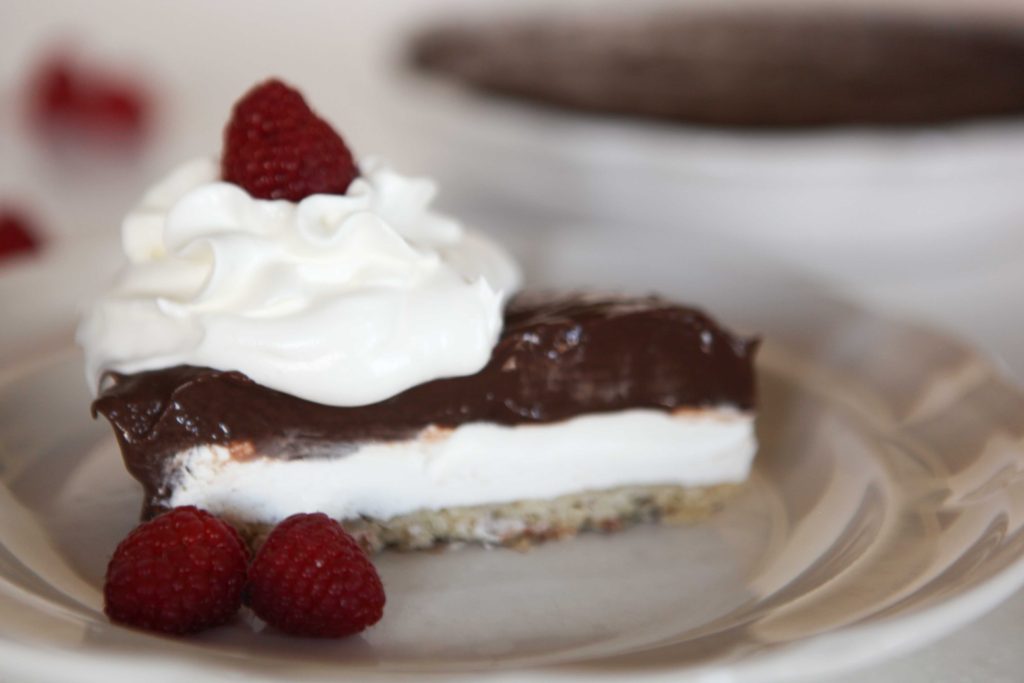