This method makes moist, savory, delicious beef for use in any way you wish.  When I make it, I always do a lot, and freeze some for another time. 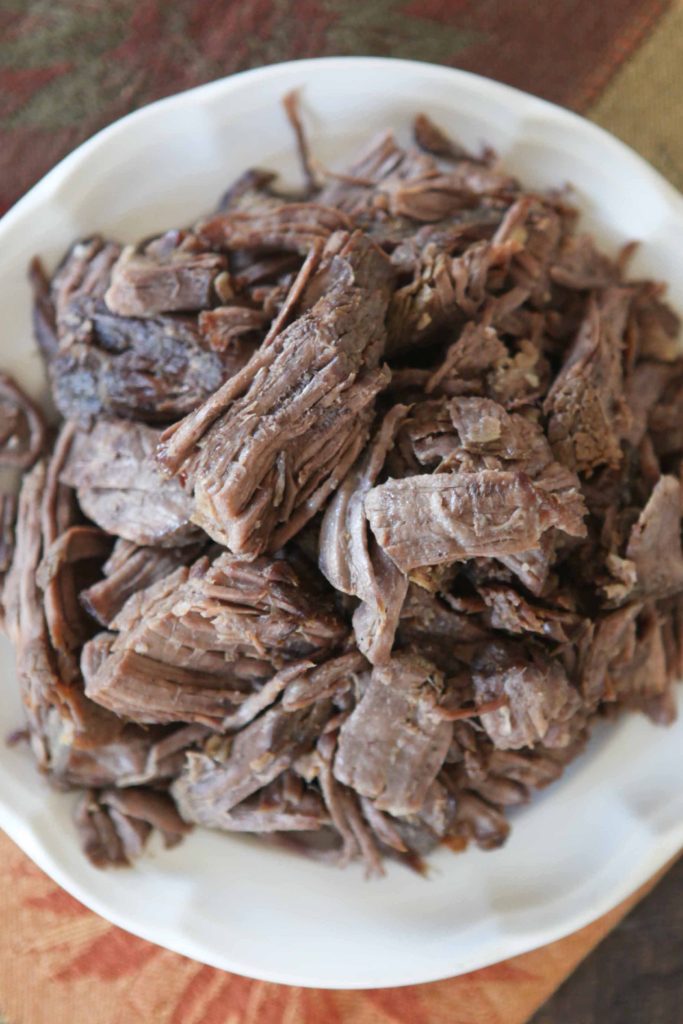 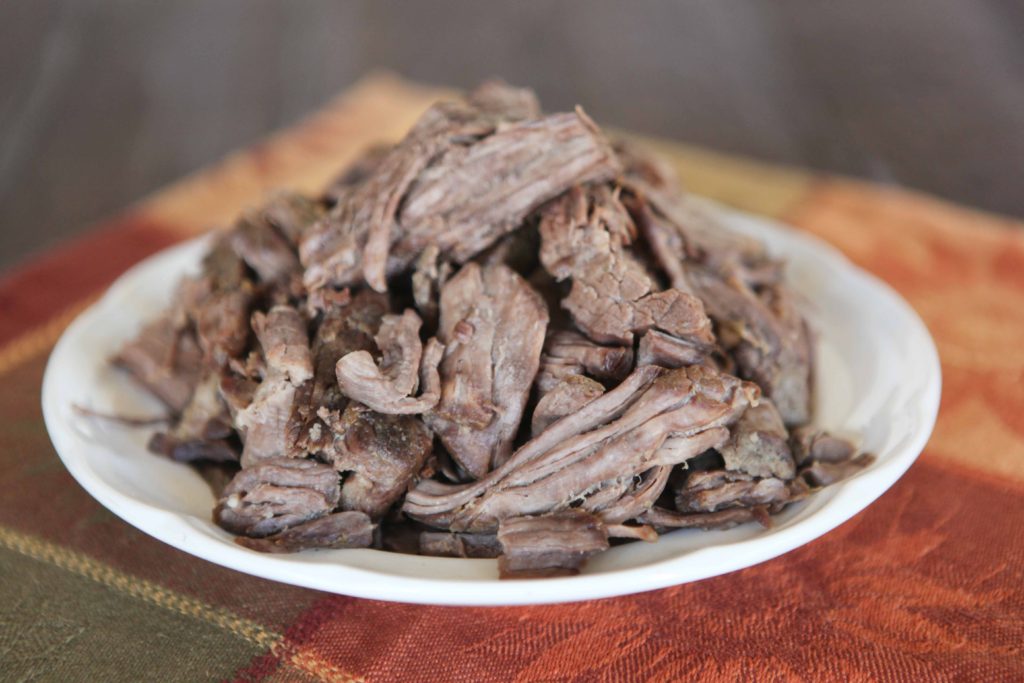 Preheat the oven to 350 degrees. 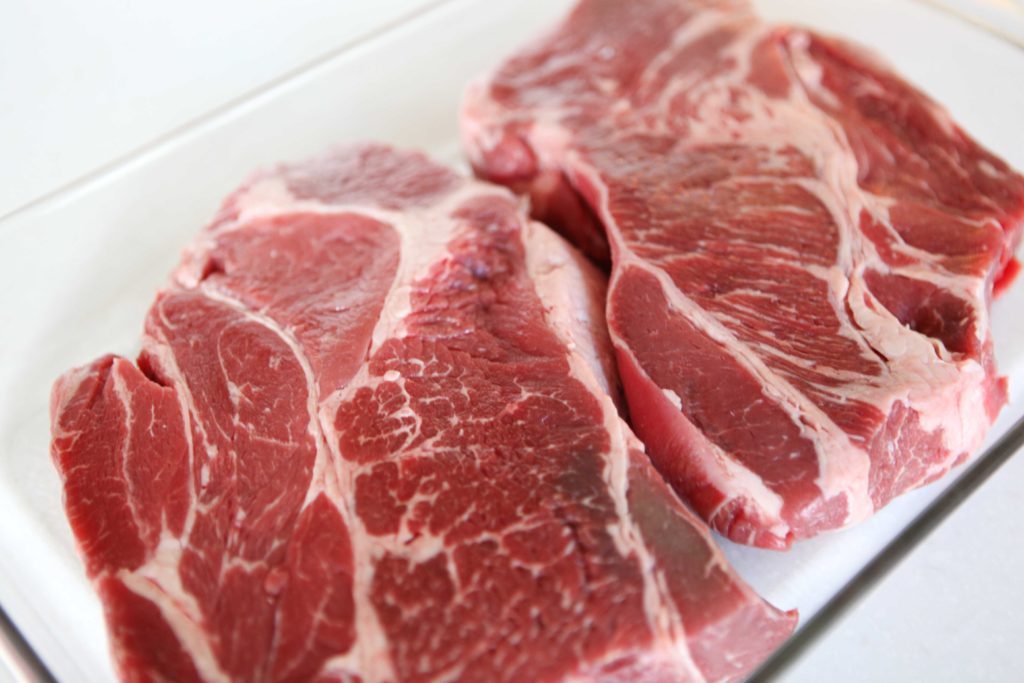 I use boneless chuck roast. In this photo, I used 2 five and a half pound roasts. (11 pounds total) 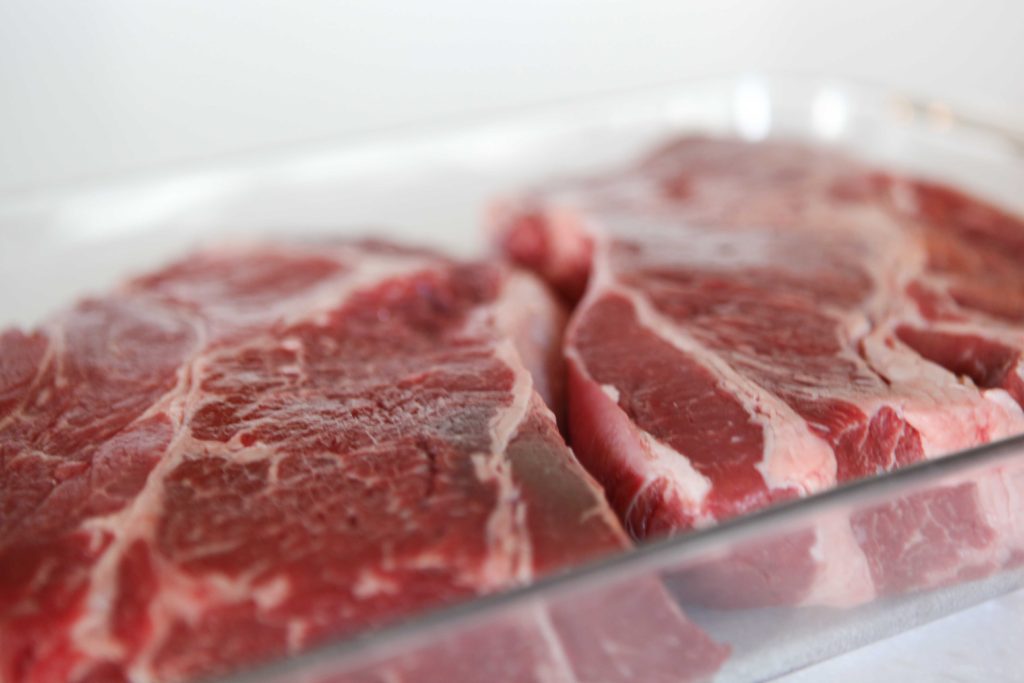 Put the meat in a greased baking pan. 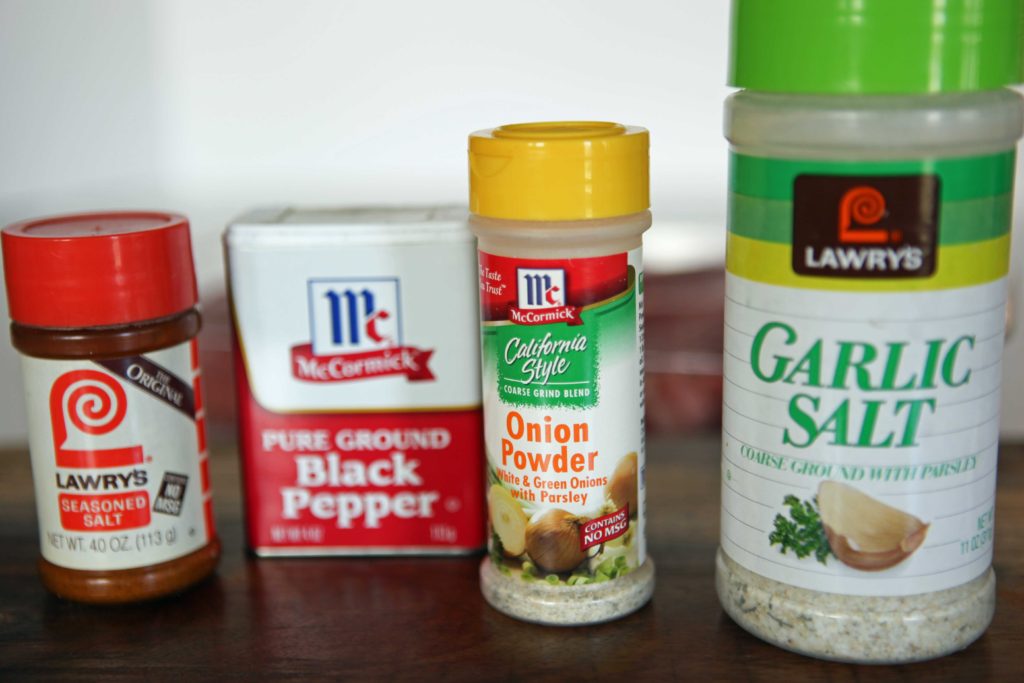 This line-up is of my usual suspects. I use about 1/2 -1 teaspoon of each of these. 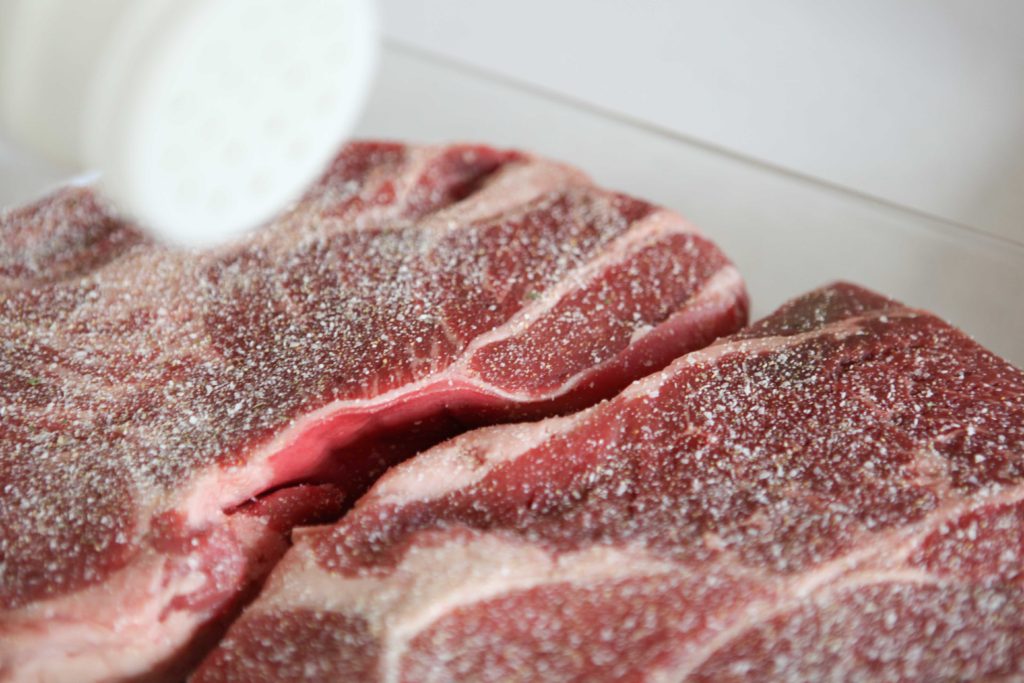 Generously sprinkle the seasonings on all sides of the meat. 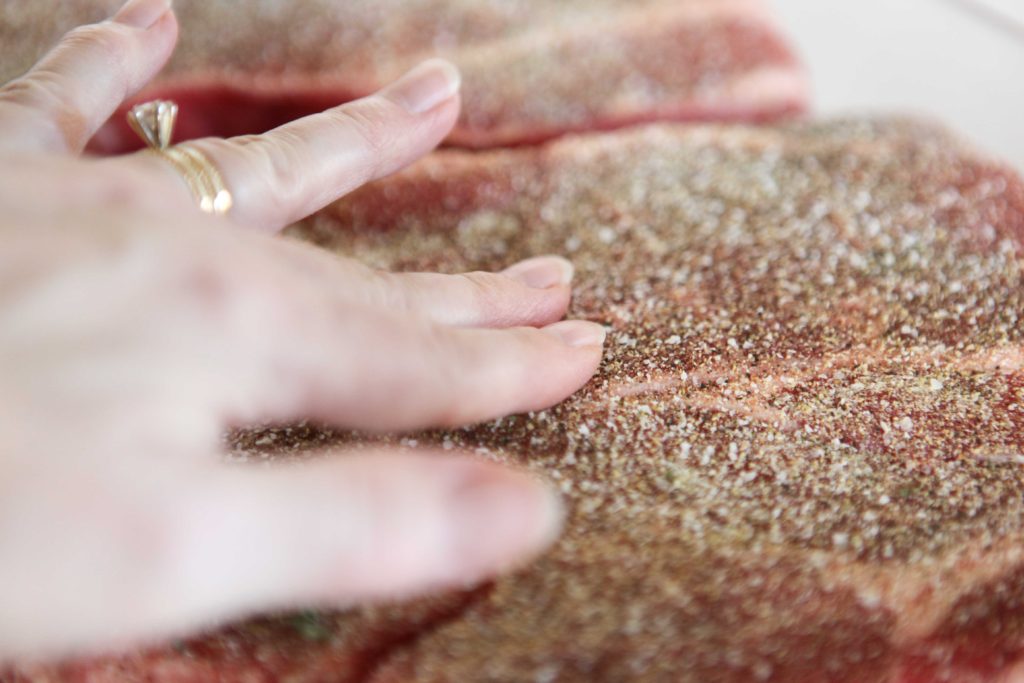 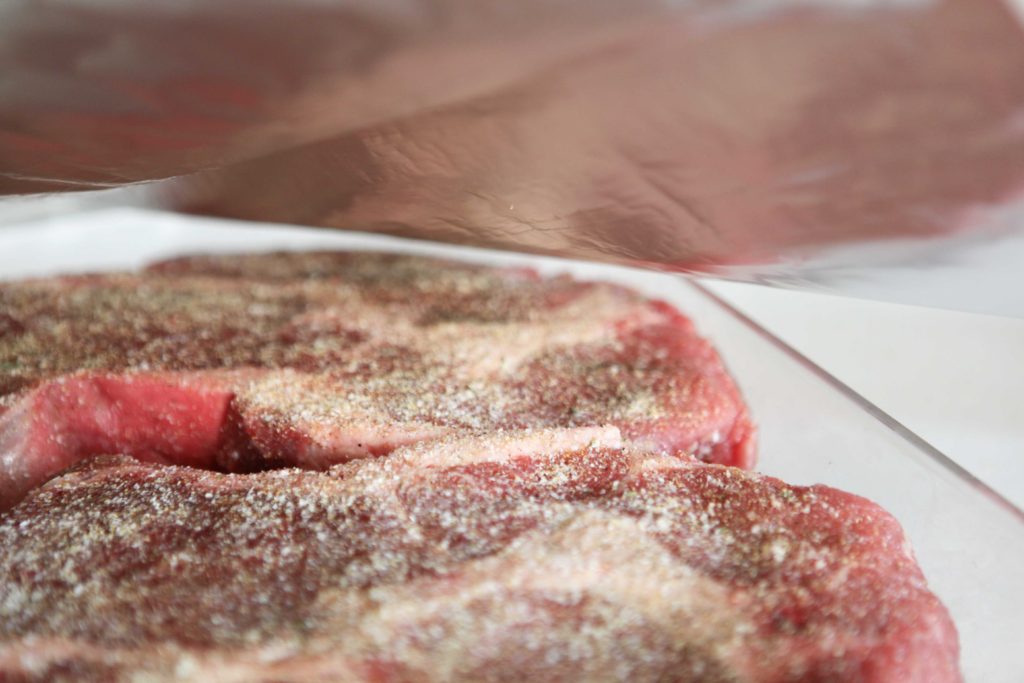 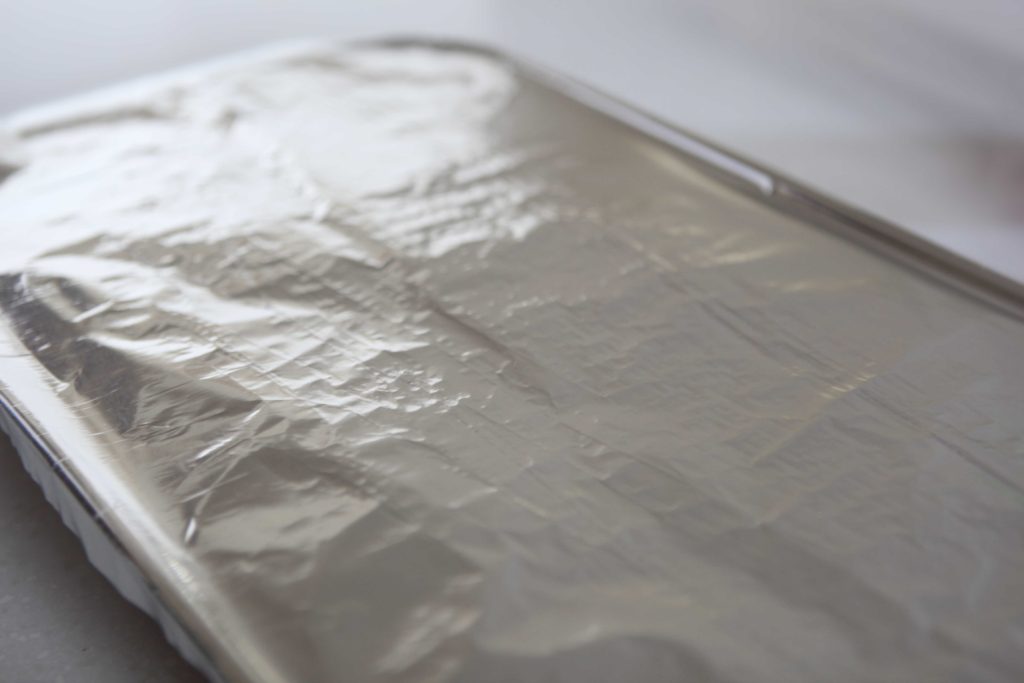 Tightly seal the foil around the pan, and bake at 350 degrees for 2 1/2 hours. Without opening the oven, turn off the heat, but leave the meat inside for another half hour. Remove the meat from oven, and allow to cool on a wire rack for another hour. Don’t remove the foil. 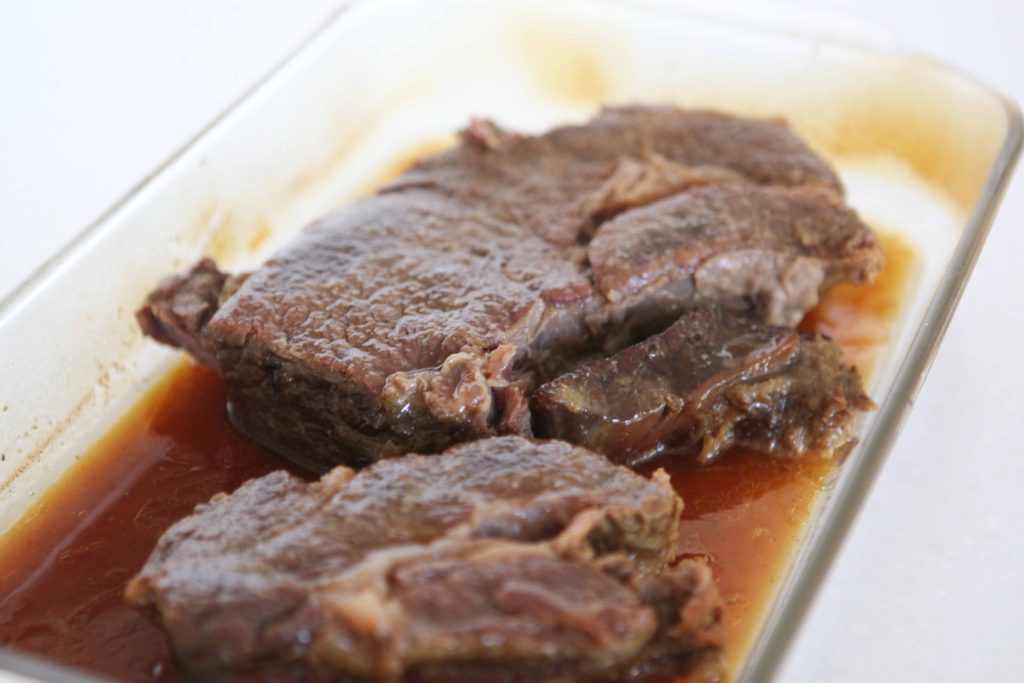 By this point, it will still be warm, but not too hot to handle. 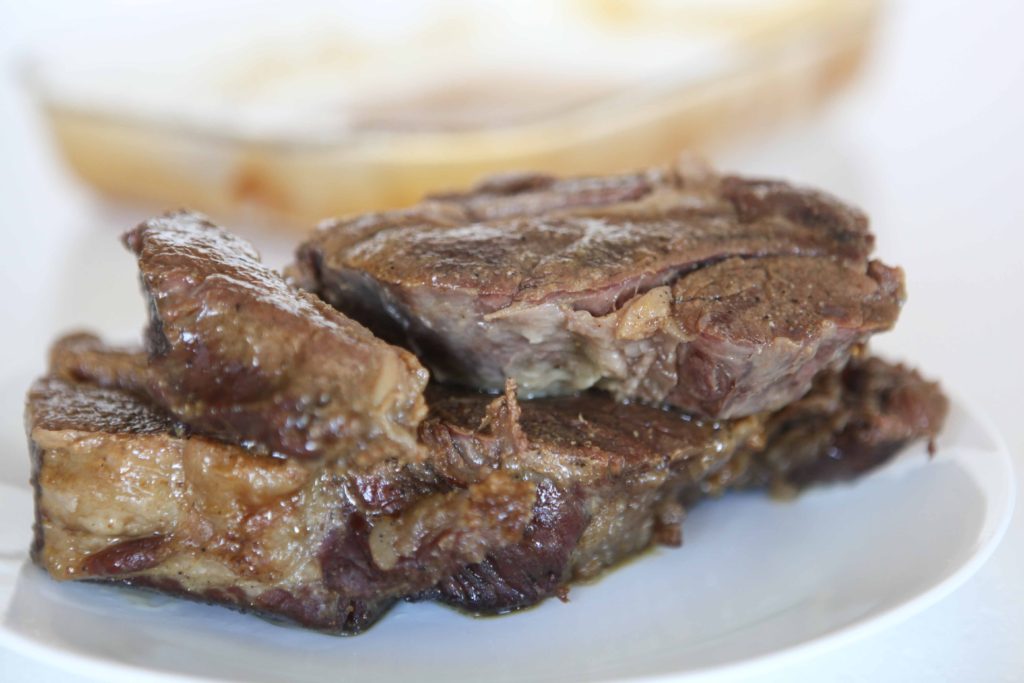 Remove from the juices, and using your fingers, separate the fat from the meat. If you wanted to keep the fat mixed with the meat, you could just tear it apart with a fork. I don’t like to eat the fat. 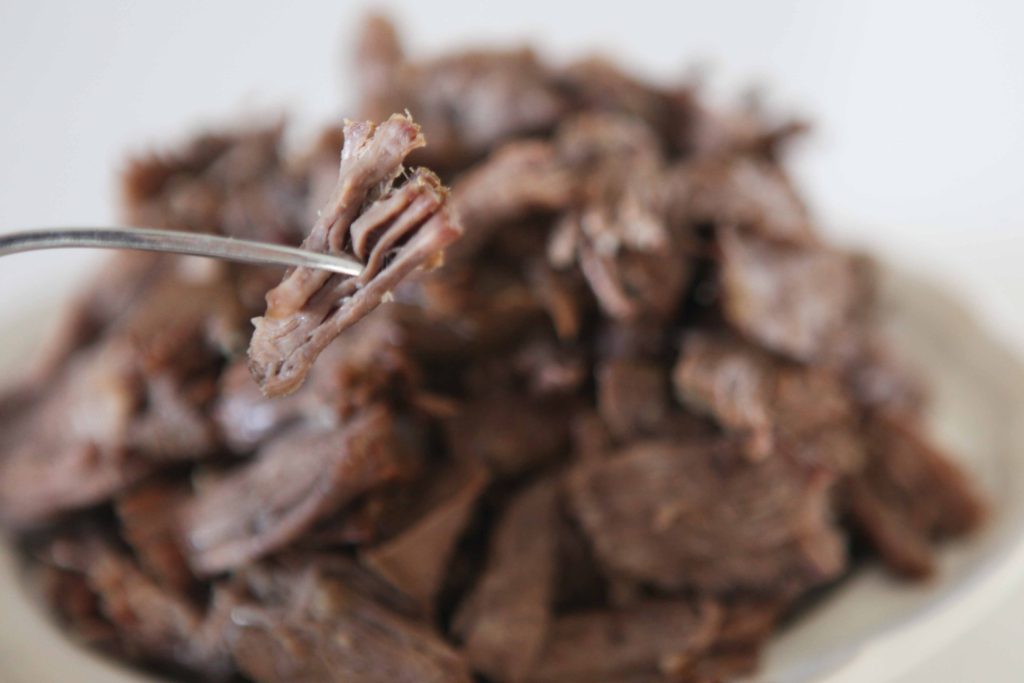 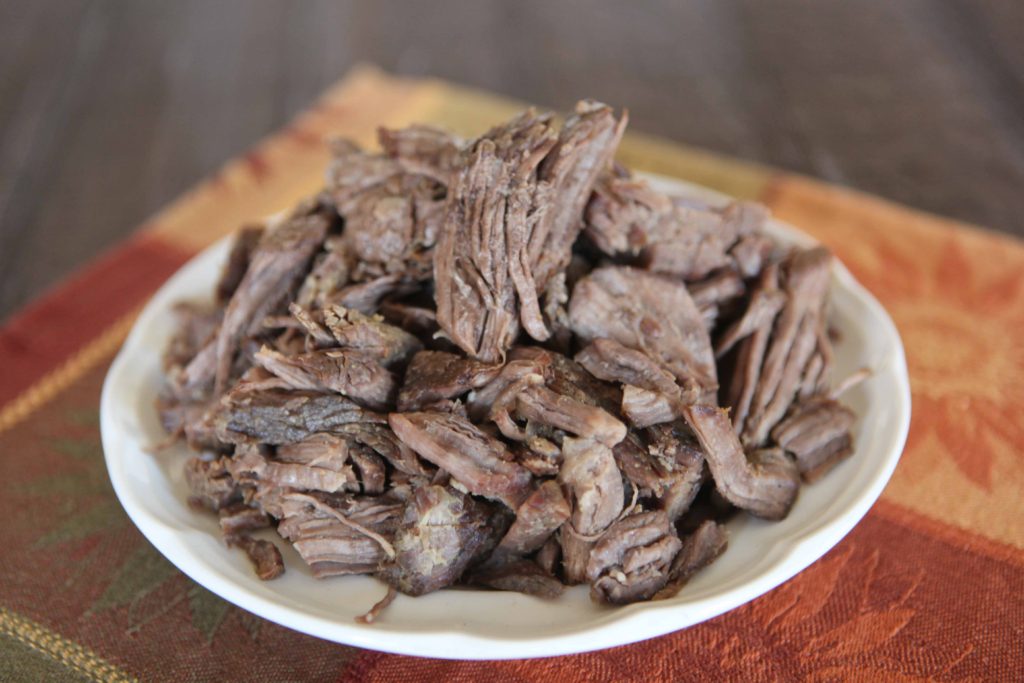 … and now for the broth. … Save it for soup, stew, or gravy.  If you aren’t using it immediately, freeze it for later.  My roasts seldom have enough drippings for gravy, so I supplement with some from the freezer. 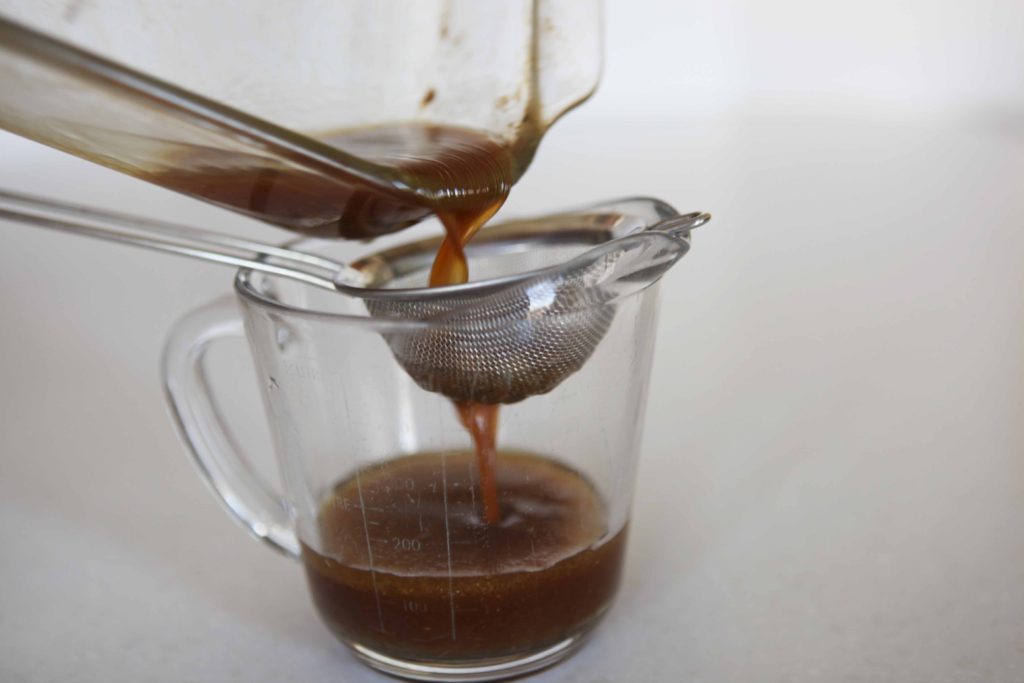 Pour it through a strainer to remove large pieces. 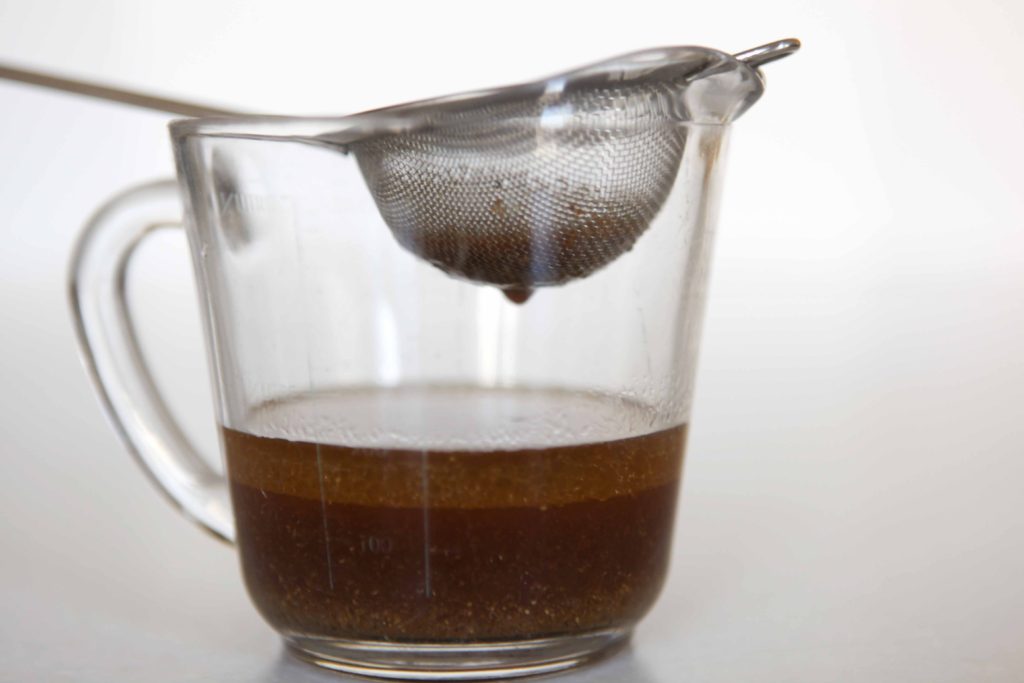 The fat will rise to the top. If you don’t need to use it immediately, put it in the fridge for a few hours. 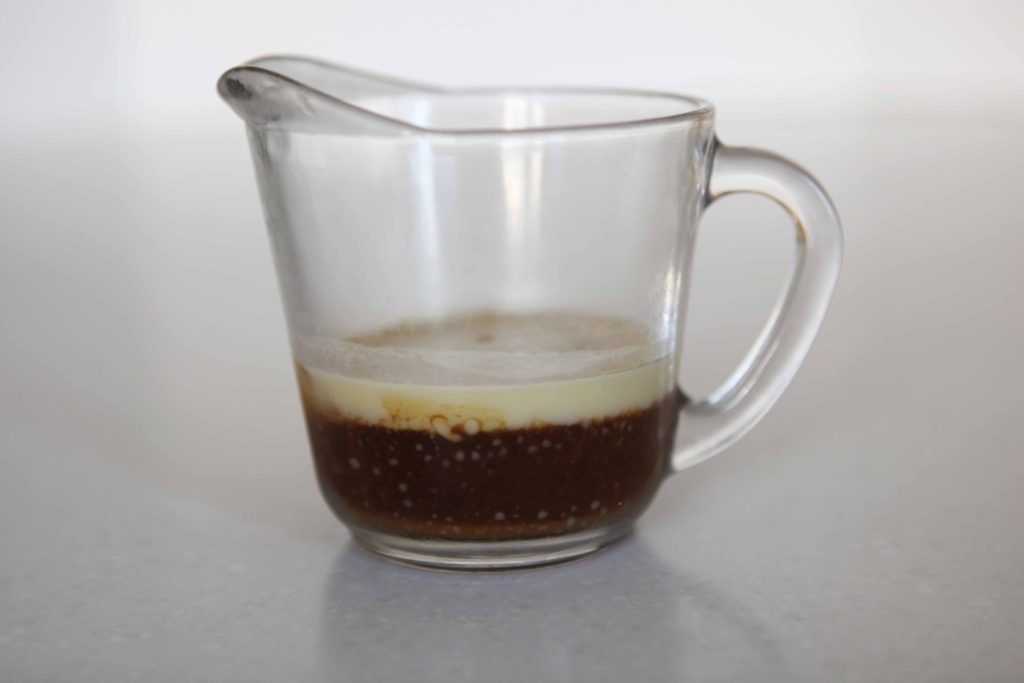 The fat will solidify. 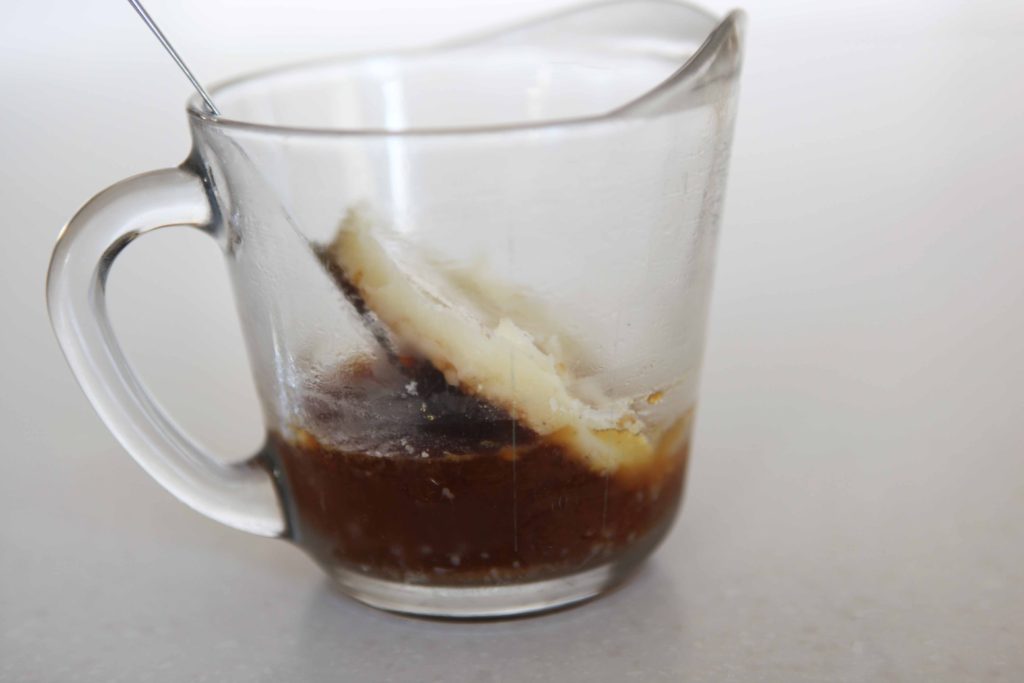 Run a butter knife around the edge of the fat, and it will easily lift away from the broth. The broth will be jelly-like, but don’t worry. It’s supposed to be that way. 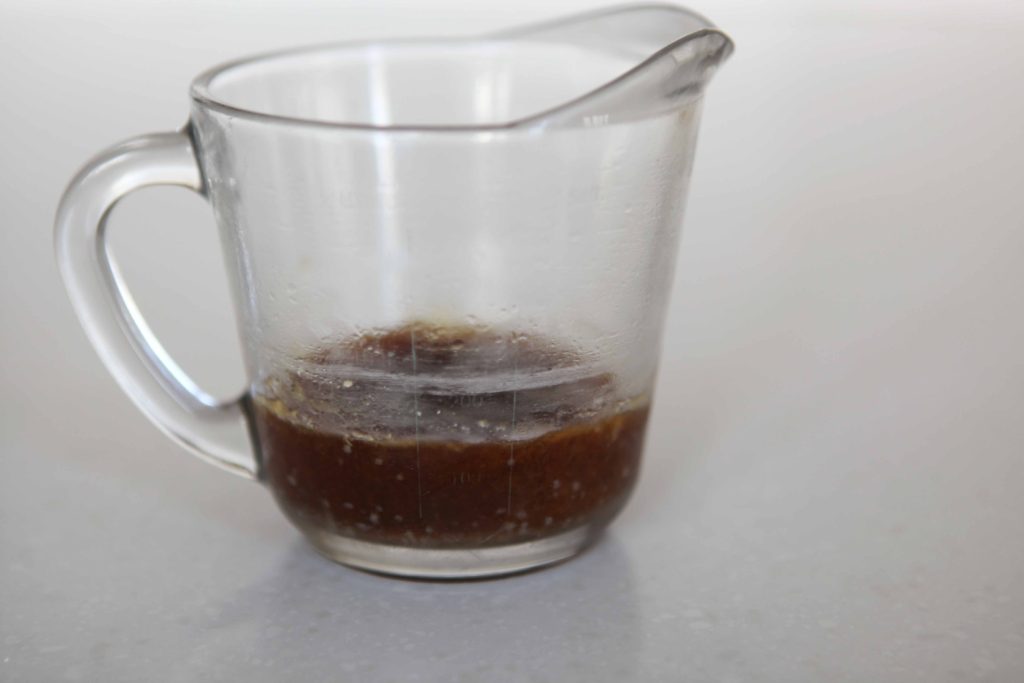 Now you have a virtually fat-free fresh broth. Use it now, or freeze it for later. 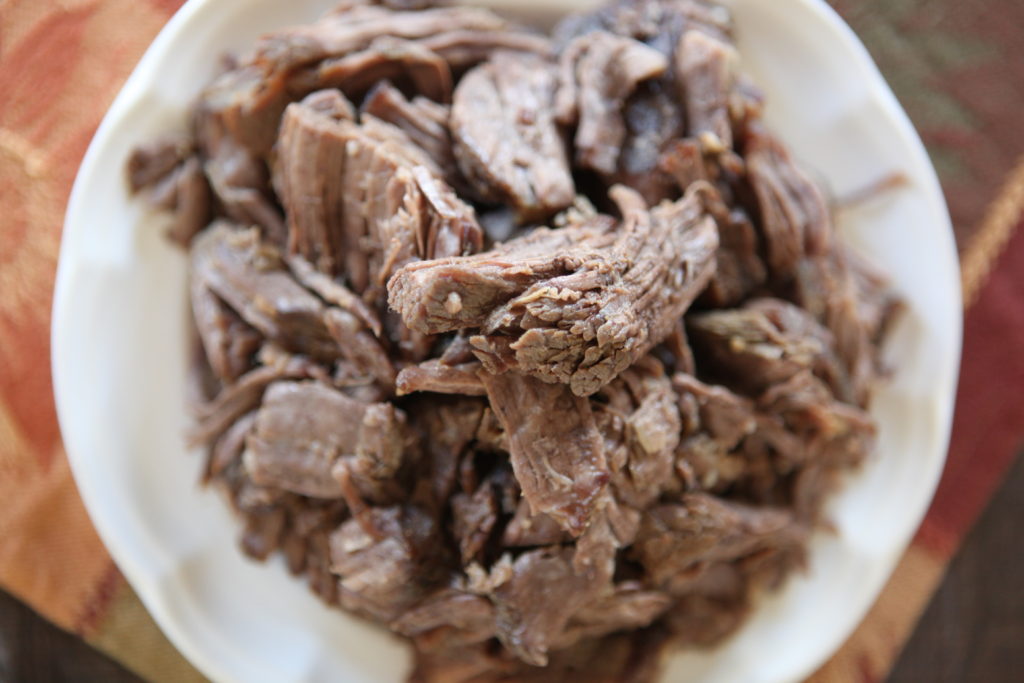